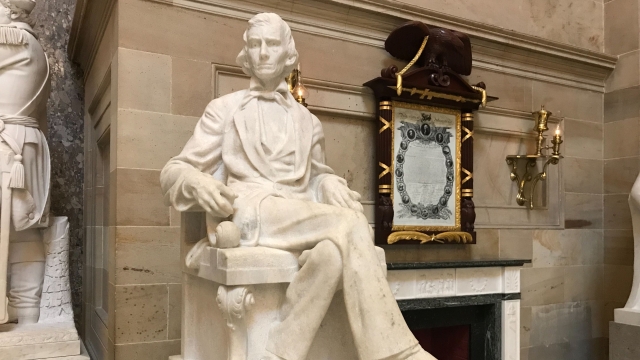 Confederate statues are coming down across the country, but not inside the U.S. Capitol.

The 11 sculptures standing watch over lawmakers in the building were donated over the years by 10 states, with two from Mississippi.

Newsy discovered most of the governors of those states seem to be in no rush to take the pieces out, despite the national reckoning over Confederate symbols in public places.

Just two states — Arkansas and Virginia — have started the complicated procedure for swapping out their Confederate statues in the Capitol.

Only the office of Georgia’s governor responded to questions about whether to replace Confederate statues.

A spokesman for Gov. Brian Kemp said it would be up to the state legislature to begin the process for removing Georgia's statue of Alexander Hamilton Stephens, vice president of the Confederacy and on display since 1927.

He did not say whether Kemp would support replacing Stephens with the likeness of someone else.

States are allowed to send two statues of famous residents to feature in the Capitol.

Congressional rules give legislatures and governors the authority to swap out sculptures as they see fit.

“This is an agreement with the states. It goes back to 1864,” said Sen. Roy Blunt, chairman of the Senate Committee on Rules and Administration.

Congress only has the ability to relocate statues to less visible spots.

“Believe me, if I had more authority, we would have fewer of those statues around,” Pelosi said. "What are these people doing here?"

Democrats introduced a bill that would give Congress the power to evict statues, sending them back home or to the Smithsonian.

Blunt blocked the legislation from advancing in the Senate, saying for now, it should still be up to the states.

“I'm encouraged that states are looking at their history, that they're looking at who has come since they put those statues in,” Blunt said during a speech on the Senate floor.