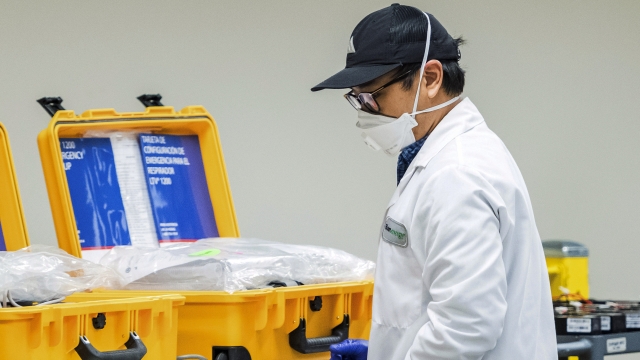 SMS
Where Are The Ventilators? Governors Begging Feds For Supplies
By Kellan Howell
By Kellan Howell
April 1, 2020
Governors are telling the White House they need thousands more ventilators to fight the coronavirus. Where are they?
SHOW TRANSCRIPT

Louisiana says it will run out of ventilators this week.

Gov. John Bel Edwards has asked the federal government for 5,000 ventilators, the state says it’s only getting 150.

"We’re working with private vendors, we got 100 in yesterday. We need a couple thousand ventilators just in the New Orleans area," he said.

New York is pleading with the federal government for more ventilators, saying the national emergency stockpile is their only hope.

"Do I think the federal government has enough in the collective stockpiles, enough in their possession to meet the need? I don’t know, but I pray that they do. Because that is the only option," Gov. Andrew Cuomo told reporters Wednesday.

Governors around the country are bracing for a spike in new coronavirus cases, asking residents to stay home, and begging the federal government to send them more ventilators.

"If we don't have those ventilators delivered in the next week, we're not going to be prepared across the state for the kind of onslaught that we are going to see," Illinois Gov. J.B. Pritzker told CNN.

President Donald Trump says the federal government has held back on sending out thousands of ventilators in anticipation of the peak of the outbreak in the U.S.

"We also have also kept in reserve, we have almost 10,000 ventilators in our line, we've held back because we had to stockpile, we didn't want to give them because we didn't know where the emergency, it hits so fast, it comes so quickly," he said during a coronavirus task force briefing at the White House on Monday.

But Pro Publica reports that a Pennsylvania company contracted last year to build 10,000 ventilators for HHS has not delivered a single one, and is instead selling more expensive ventilators overseas.

Dr. Anthony Fauci, the White House's top expert on infectious diseases, sought to assure state officials that they would get ventilators, saying it's a matter of getting them from point A to point B.

"There are some that say there are ventilators that are there in a certain place that's accessible, we just need to connect the dots to get them accessible," he said in an interview with CNN.

The military has committed to transferring 2,000 ventilators to FEMA and HHS, but the Pentagon says it hasn't shipped them yet because it hasn't received the request for the machines nor has it been given a shipping location.

FEMA told Newsy that some of those 2,000 ventilators from the Defense Department were shipped out on the Navy hospital ships Mercy and Comfort.

FEMA also confirmed that there are just under 10,000 ventilators in the national emergency stockpile.

A spokeswoman for FEMA told Newsy that due to the scarcity of ventilators, the agency is distributing enough to states to manage their immediate crises. In the case of ventilators, immediate is defined as requirements necessary to sustain life within a 72-hour window.