Why Shutting Down The Government Costs So Much Money 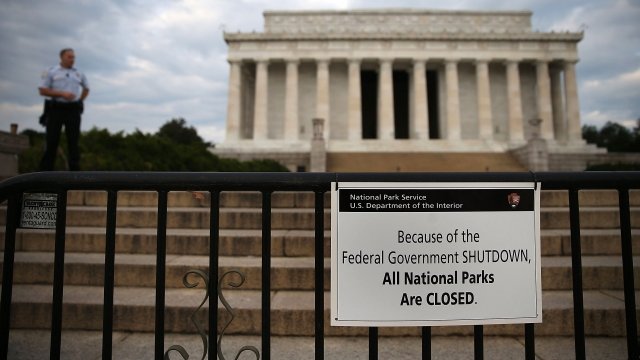 SMS
Why Shutting Down The Government Costs So Much Money

By Kellan Howell
December 20, 2018
Government shutdowns can cost billions of dollars and they can make a dent in the U.S. economy. Here's why.
SHOW TRANSCRIPT

Government shutdowns can be really expensive. The time and money spent preparing for a shutdown and recovering after it ends can add up to billions of dollars in lost productivity. And a dip in pay for federal workers can put a dent in America’s economy.

Federal employees are often hit hardest. Furloughed workers have gone weeks without pay during past shutdowns.

About 850,000 government workers were furloughed per day during a 16-day shutdown in 2013. After the government reopened federal employees were retroactively paid $2.2 billion, according the White House’s Office of Management and Budget.

"So what we’re doing is, we’re sending people home for a week or for two weeks and then when they come back, we pay them and no work was done during those two weeks. So, that has to be made up for," said Stan Veuger, a resident scholar specializing in political economics with the American Enterprise Institute.

But productivity isn’t just lost while workers are on furlough. Federal employees can spend thousands of hours preparing for a shutdown and then catching up with work once it ends.

"If you run a national park, you have to shut down the park and make sure no one can get in. If you are at DOJ, the Department of Justice, and you’re preparing cases or things like that, you may have to delay interviews, delay meetings with people outside the organization. Things like that just require time to plan for," Veuger said.

Shutdowns also lead to less revenue for the government. For example, OMB estimates the 2013 shutdown cost $500 million in lost spending by visitors to national parks.

And the longer a shutdown goes on for, the more risk there is that the financial pain will spread beyond government agencies.

"You can start seeing more macroeconomic-type effects like if spending just goes down for a few weeks, that can have an impact on the performance of businesses during that month and during that quarter," Veuger said.

About 1.2 million people applying for home mortgages experienced delays during the 2013 shutdown because the IRS couldn’t process their paperwork.

During the 1995 shutdowns, small businesses lost the opportunity to bid on an estimated 1,036 contracts valued at $244 million. That’s almost $391 million in today’s dollars.

Earlier this year Standard and Poor’s estimated a government shutdown could cost the economy about $6.5 billion per week.