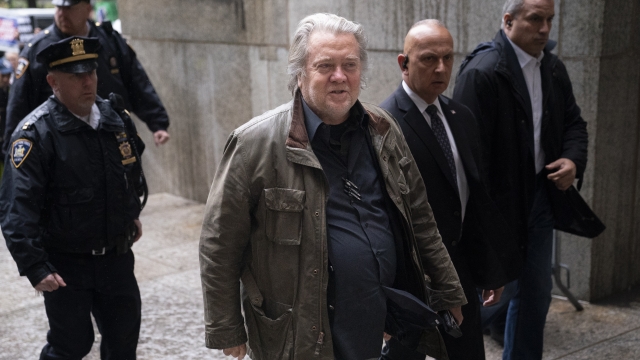 Bannon is set to be sentenced Friday on two counts of contempt of Congress for refusing to cooperate with the House committee investigating Jan. 6.

The Justice Department said Monday that Steve Bannon should serve six months in prison and pay a $200,000 fine for defying a congressional subpoena from the House committee investigating the Jan. 6 insurrection at the U.S. Capitol.

The longtime ally of former President Donald Trump should serve a hefty sentence because he “pursued a bad-faith strategy of defiance and contempt” and he publicly disparaged the committee itself, undermining the effort to get to the bottom of the violent attack and keep anything like it from happening again, federal attorneys wrote. He has not yet provided any documents or answered any questions, they said.

“The rioters who overran the Capitol on January 6 did not just attack a building — they assaulted the rule of law upon which this country was built and through which it endures,” federal attorneys wrote in court documents. “By flouting the Select Committee’s subpoena and its authority, the Defendant exacerbated that assault.”

Bannon’s defense attorneys didn’t immediately respond to a message seeking comment. His lawyer, David Schoen, has said the case would be reversed on appeal.

The Justice Department push comes shortly after the committee took the extraordinary step last week to subpoena Trump himself, something the members said was necessary to get the full story of what happened that day. It's unclear how Trump will respond to the summons, but a refusal to comply could open up a similar path in court — though holding a former president in contempt would be an unprecedented and fraught process.

Bannon, meanwhile, is set to be sentenced Friday on two counts of contempt of Congress: one for refusing to sit for a deposition and another for refusing to provide documents. The committee had sought Bannon’s testimony over his involvement in Trump’s efforts to overturn the 2020 presidential election.

Bannon initially argued that his testimony was protected by Trump’s claim of executive privilege, but the committee was skeptical because the adviser had been fired from the White House in 2017 and was thus a private citizen when he was consulting with the then-president in the run-up to the riot on Jan. 6, 2021.

Trump's own lawyer, meanwhile, told Bannon's lawyer in October 2021 that he didn't believe there was immunity for him, and he should cooperate with the subpoena, according to Monday's sentencing memo.

Federal attorneys are also asking for the maximum fine, saying Bannon refused to cooperate with routine questions about his finances and said he could pay whatever the court imposed.

Defense attorneys argued during the trial that he didn’t refuse to cooperate and that the deadline dates “were in flux.” They pointed to the fact that Bannon had reversed course shortly before the trial kicked off — after Trump waived his objection — and had offered to testify before the committee.

But that offer came with strings attached, federal attorneys wrote, including the dismissal of the criminal case against him. When it became clear that wasn't in the cards, the possibility of cooperation faded, court records state.

Bannon was convicted after a four-day trial in July. Outside the courthouse, he compared the trial to a battle and said “we’re not going to lose this war,” then referred to members of the committee as “gutless."

It was not the only time Bannon disparaged the committee in “exaggerated and sometimes violent” language in news conferences and on his “War Room” podcast, prosecutors wrote.

“The defendant’s statements prove that his contempt was not aimed at protecting executive privilege or the Constitution, rather it was aimed at undermining the Committee’s efforts to investigate an historic attack on government,” federal attorneys said in court documents. “To this day, he continues to unlawfully withhold documents and testimony that stand to help the Committee’s authorized investigation to get to the bottom of what led to January 6 and ascertain what steps must be taken to ensure that it never happens again. That cannot be tolerated.”