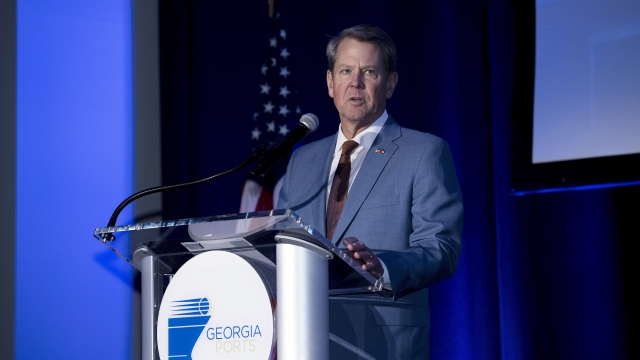 SMS
Ga. Gov. Accused Of Using Loophole To Cancel Elections, Appoint Judges
By Alexandra Miller
By Alexandra Miller
March 24, 2022
Georgia's constitution allows Gov. Brian Kemp to appoint a judge who can serve for as long as two years before the election is rescheduled.

Georgia is one of nearly two dozen states to elect its judges in nonpartisan elections.

But critics say Republican Gov. Brian Kemp is now skirting the system with a legal loophole that cancels elections, allowing him to appoint judges instead.

Here's what has happened, at least twice so far: Georgia's constitution outlines that if a judge retires in the middle of their term, the governor can appoint a replacement. But if that retirement happens within six months of an election, the election is canceled. The appointee can serve for as long as two years before the election is rescheduled.

"The constitution had been effectively construed so as to allow retiring judges and governors — in combination — to pull the rug out from under people at any point before an election," Barrow continued.

Barrow saw this happen in his own case when he ran to fill State Supreme Court Justice Keith Blackwell's vacant seat in 2020. Blackwell left the bench just weeks before his term was set to expire, allowing the governor to appoint a replacement and the secretary of state to cancel the election.

He sued with his Republican opponent and lost. Now two years later, that Kemp-appointed justice is running unopposed. Barrow told Newsy these actions have a chilling effect on future candidates.

"The effect of this is to greatly separate the judges from the people who are supposed to elect them," he said.

Georgia attorney Scott Key says that appointed justices get another tangible benefit when the election finally comes around: Incumbency status.

"Even if it's a month, even if it's six months, that person still has the 'I' by their name on the ballot. And that makes a huge difference," Key said. "Is the governor technically taking away the voters' choice? Technically, no. But I mean, I think that's the practical result of it being done like that."

Observers say most voters tend to favor the incumbent, especially in these elections. All of this, a legal loophole — arguably reducing the voice of voters.

"Short of litigation, it's gonna take a general the General Assembly fixing it," Key continued. "And it'll probably occur at a time when you have a governor who's a different party from the majority of the Georgia General Assembly."

Attorney Brandon Bullard says most Georgia voters are not even aware what's happening.

Gov. Kemp declined Newsy's request for an interview but a spokeswoman said in a statement: "Our office is reactive to decisions made by judges themselves. Governor Kemp has always acted within his lawful authority to appoint members of the judiciary when a vacancy has occurred."