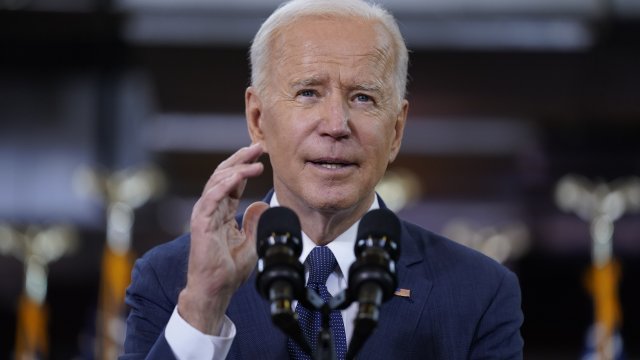 From road and bridge construction…To caring for the elderly…To boosting electric vehicles...The Biden administration’s $2 trillion jobs plan is broad based.

But critics are pointing out that only an estimated *5 percent is going *directly to traditional infrastructure projects.

Biden administration officials took to the Sunday morning talk shows to defend it.

"I think it’s important we upgrade our definition of our infrastructure," White House economic adviser Cecilia Rouse said. "One that meets the needs of a 21st century economy, and that means we need to be funding and incentivizing those structures that allow us to maximize our economic activity."

"T raditionally the internet wasn’t considered infrastructure because in the Eisenhower years of course it didn't exist, but infrastructure investment has to include looking to the future," Transportation Secretary Pete Buttigieg said.

The Biden administration is looking to big companies to foot the bill...reversing the corporate tax from its Trump-era cut.

“When you talk about big businesses and you say we should raise their tax rate from 21% corporate rate to 28%, let me just tell you that's going to cut job creation in the United States of America, and it's the very reason we lowered those tax rates in 2017," said Republican Senator Roger Wicker of Mississippi.

As for the American public...a new Reuters-Ipsos poll shows wide support for spending on infrastructure like roads and bridges. But for President Biden’s wider plan...45% support it, 27% oppose….and 28% are still unsure.