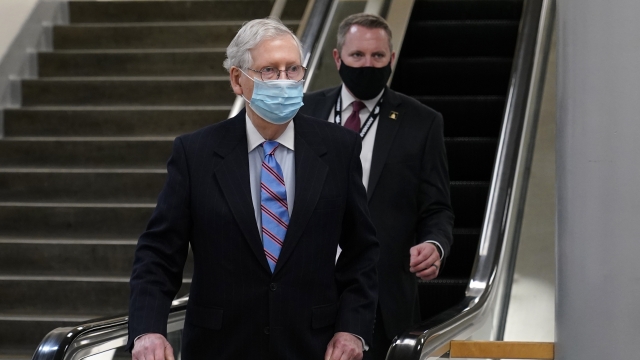 SMS
GOP Lawmakers Rally Against COVID Relief Package
By Newsy Staff
By Newsy Staff
February 25, 2021
A huge sticking point for Republicans is that the proposal could boost the minimum wage to $15 an hour over the next five years.
SHOW TRANSCRIPT

The House is set to vote on the $1.9 trillion proposal tomorrow. But so far not a single Republican in Congress has publicly said they'd support the proposal, and there are a few reasons why. They say it's too expensive, too partisan and has too many items in it that aren't related to COVID.

"I remember the inauguration speech of President Biden, he wanted to change the culture in Washington," said Sen. Lindsey Graham. "He wanted to bring us together. He picked the one issue that we were actually working together on and blew it up."

"I got to tell you that this is the farthest distance between common sense and the Democrat policies," said Sen. Tim Scott.

"The White House seems determined to do this with only Democratic votes," said Sen John Cornyn. "I think it's it's a mistake, but if they want to try it, that's really up to them."

A huge sticking point for Republicans is that the proposal could boost the minimum wage to $15 an hour over the next five years. They say that will kill jobs.

While GOP members of Congress oppose the relief package, most of their constituents support it, according to a new poll.

A survey from Morning Consult and Politico shows 60% of Republican voters either strongly support or somewhat support the plan and 30% strongly or somewhat oppose it. Among all voters, 76% said they support the deal.