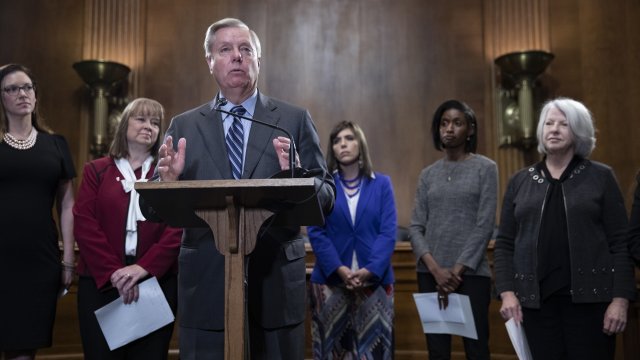 It's one of several bills that Republican lawmakers want another vote on.

Republicans are showing a renewed interest in restrictive abortion laws, thanks in part to support from President Trump.

“Legislative bodies like the Congress should have the authority to protect an unborn child," said U.S. Sen. Lindsey Graham at a Senate Judiciary Committee hearing on the Pain-Capable Unborn Child Protection Act.

The Senate Judiciary Committee held a hearing on the Pain-Capable Unborn Child Protection Act six years after it was first introduced. The bill seeks to ban abortions after 20 weeks gestation, with exceptions for rape and to save the life of the mother.

The legislation has strong opposition from the other side of the aisle and has little chance of passing through the Democratic-controlled House. But this comes on the heels of a big push by the GOP for similar abortion legislation. Though abortion remains one of the country's most divisive issues, a majority of Republican voters say it should be illegal.

And in his most recent State of the Union address, President Trump called on Congress to pass legislation that would ban late-term abortions.

Later in February, the Senate voted on the Born-Alive Survivors Protection Act. If the bill had passed, it would require that health care providers who are present when a child is born alive during an abortion exercise the same level of care they would for any child.

While each proposal targets abortion in a different way, they do share one similarity: criminal punishment. In both bills, any abortion provider that doesn't comply with the new laws would be subject to fines and/or up to five years in prison.

If Roe V. Wade Were Overturned, Would Women And Doctors Be Punished?

A slew of new bills are putting the future of criminal punishment for abortion into question.

While debating access to abortion is one part of the discussion, deciding whether there should be criminal punishment involved is another thing — and something that the anti-abortion rights community has grappled with. And even though Congress has yet to pass any legislation that would restrict abortions, a majority of state legislatures are currently considering bills that would limit abortion in a variety of ways. By 2018, all but 10 states had imposed a restriction on abortion, ranging from mandated counseling to parental involvement.