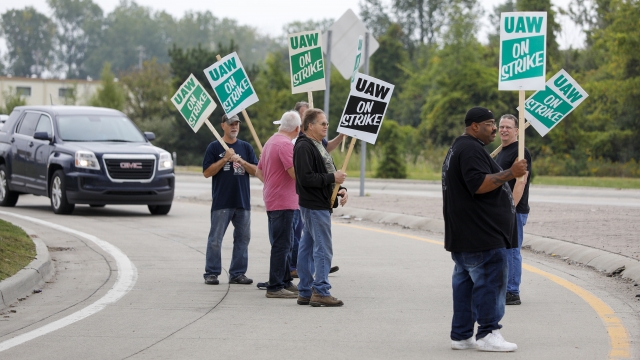 The General Motors Corporation earned more than $8 billion globally last year. So it may seem that the automaker has rebounded from its 2009 bankruptcy.

But then there's this: GM closed three plants last year in Ohio, Michigan and Maryland in the face of diminishing U.S. car sales and demand. And now nearly 46,000 GM workers are on the picket lines at 34 assembly and parts plants after a Sunday strike vote.

The UAW says it's striking for the first time since 2007 to get GM to open its shuttered plants, improve worker pay and advancement, and bring part-time workers into full-time employment. The company wants concessions on health care and flexibility in worker status to ward off a potential economic downturn.

UAW Vice President Terry Dittes says the two sides aren't close on a new contract and says he is uncertain how long the walkout will last.

"We're very focused on these negotiations, the people behind us, their families, their communities and, quite frankly, these American jobs. Because for every auto worker here there are seven additional jobs attached to what they do. That is the big picture,” Dittes said.

GM says it made a "strong offer," including raises, sign-on bonuses for new employees and health care concessions. It pledged $7 billion of investments in U.S. plants to create 5,400 new jobs, but made no promises on changing the status of part-time or temporary workers.

Bloomberg estimates the strike is costing the company $50 million a day. And industry observers say it hits as the U.S.-China trade war further slows car sales and as new automotive technologies, including electric and self-driving vehicles, require new investment.

American automobile factories, while in decline for decades, still employ 220,000 workers. They provide a critical foundation for the vast U.S. vehicle industry, which accounts for 3 percent of gross domestic product.

But University of Michigan professor Erik Gordon, who studies the industry, says: “Carmakers’ profits today distract from two challenges. The makers will be going into a down cycle of demand in their two most important markets, and they will have to make the biggest technology investments in their history."

The strike affects industrial states key to President Trump's re-election. He boasts of support from average UAW members and says he hopes for a resolution.

"We don’t want General Motors building plants outside of this country, and we’re very strong on that. Hopefully they will work that out quickly and solidly,” President Trump said.

Tamara Abney, an assembly worker in Detroit, says the future is on the line for GM and its workforce.

"This job is very important to me. I am a third-generation General Motors employee, OK. I have two sisters that work here at Detroit Hamtramck with me as well. My father was here and his uncle before him. Three generations. I have children and my children will have children and I want this place to still be around for them."

The strike is a major test for unions, which have seen membership drop by almost half since 1983. But a recent Gallup poll says public support is rising, with 64 percent of Americans approving of unions — up from 48 percent in 2009.