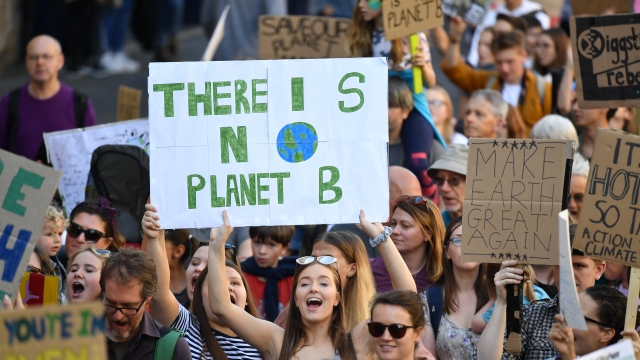 SMS
Global Climate Strike Kicks Off In Australia, Thailand And New Zealand
By Katherine Biek
By Katherine Biek
September 20, 2019
From Berlin to Hong Kong to Paris to New York City — more than 4,600 protests are scheduled in roughly 140 countries on Friday.
SHOW TRANSCRIPT

As part of a global movement to save the planet, people are taking to the streets around the world to protest against climate change.

From Berlin to Hong Kong to Paris to New York City — more than 4,600 protests are scheduled in roughly 140 countries on Friday.

Some of the day's earliest rallies started in Australia, where more than 100 marches drew in a combined crowd of about 300,000 people.

Meanwhile hundreds of thousands of protesters were seen mobilizing in the Pacific Islands, New Zealand and Thailand. In the latter, participants chanting "Save our Earth" marched to the Ministry of Environment to deliver their message directly to government leaders.

Thousands of businesses are also taking part in the strikes — by closing down for the day, redirecting online users to the Global Climate Strike website or by donating ad space. Additionally, some schools, including those in New York City, are allowing students to skip class in order to participate.

The worldwide protests are inspired, in part, by 16-year-old Swedish activist Greta Thunberg. She's staged weekly sit-ins outside Sweden's Parliament and most recently testified before U.S. lawmakers on climate change.

Thunberg, who was nominated earlier this year for the Nobel Peace Prize, is spearheading a rally in New York City.