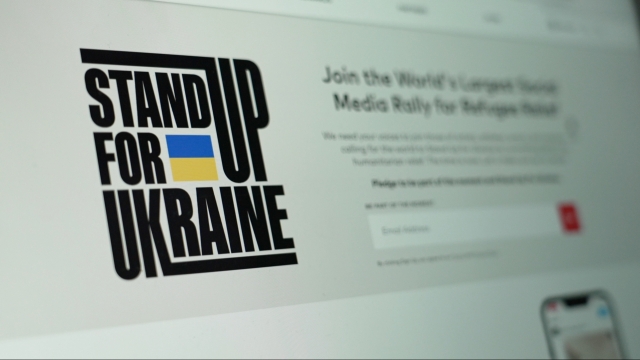 That's just one of a growing number of social media posts, stamped with the hashtag #standupforukraine.

"It is a tragedy of epic, historic proportions," singer Eddie Vedder said in a video.

The posts aim to amplify support through a social media rally. The goal? Bring people across the world together to ask world leaders, corporations and individuals to help with emergency funding.

"We're also going to ask you to dig into your pockets. Be part of the greatest global relief plan mankind has ever seen," Brooks and Yearwood continued.

"Join all of us on E-Street and Global Citizen as we stand up for Ukraine and stand up for those displaced globally because everyone deserves safe and humane living conditions," singer Bruce Springsteen said in a video.

It's ahead of a pledging summit to be held in Warsaw Saturday, convened by Canadian Prime Minster Justin Trudeau and the European Commission President.

"I'm inviting everybody: musicians, actors, athletes, businessmen, politicians, everybody. Everyone who wants to join this movement and 'Stand Up for Ukraine,'" President Zelenskyy said in a video.

The effort is led by Global Citizen, which says a child from Ukraine becomes a refugee every second.

Join artists, athletes, advocates, & Global Citizens all around the world as we use our voices to fight for refugees in Ukraine and in conflict areas globally.

Here's how you can join 👇 https://t.co/PFlIykunOj

The United Nations High Commissioner for Refugees says 12 million people need help right now because of the war in Ukraine.

"We're asking everyone who sees this to amplify this call. Post yourself, share a video from an activist or share this video so our leaders know we need the world to stand up for Ukraine and support refugees," singers the Jonas Brothers said in a video.

"They need humanitarian aid and they need it now. When you meet with the other world leaders to discuss funding, will you also stand up for refugees?" actor Hugh Jackman asked in a video.

It's not too late for you to get involved and help amplify this message. Global Citizen asks you to film a video explaining why you're standing up for Ukraine,  or share someone else's, and ask the world to give big at tomorrow's pledging summit. Use the hashtag #standupforUkraine.

And if you want to see a collection of some of the posts already out there,head to forukraine.com.