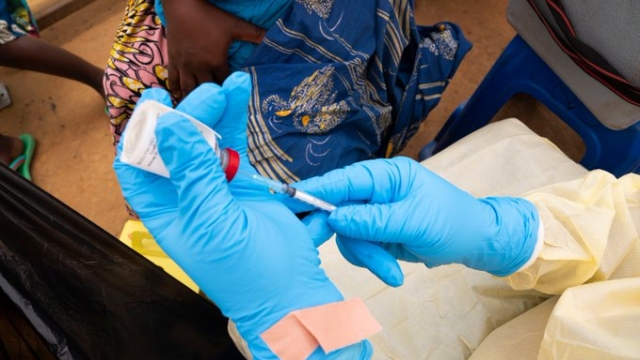 SMS
Global Aid Group Says It Is Facing Vaccination Roadblocks in Congo
By Caitlin Baldwin
By Caitlin Baldwin
September 23, 2019
Doctors Without Borders says it is struggling to vaccinate hundreds of thousands of people.
SHOW TRANSCRIPT

A global aid group says the World Health Organization is making it difficult to vaccinate hundreds of thousands of people amid an ongoing Ebola outbreak in the Democratic Republic of the Congo.

Doctors Without Borders said Monday it's calling for the creation "of an independent, international coordination committee to improve the transparency of the vaccination programme [sic] and increase access for the population."

Doctors Without Borders says that for every confirmed Ebola patient, between 150-200 contacts should be vaccinated. So with more than 3,100 cases, up to 600,000 people should have received the vaccination. But the reality is that only 225,000 people have been vaccinated.

Doctors Without Borders says the WHO's "tight controls on supply and eligibility criteria" has made it difficult to get and give the vaccine. In fact, the group says almost a third of frontline health workers have been vaccinated.

Doctors Without Borders Emergency Coordinator Dr. Natalie Roberts said, "It’s like giving firefighters a bucket of water to put out a fire, but only allowing them to use one cup of water a day. Every day we see known contacts of confirmed Ebola patients who have not received their dose despite being eligible for vaccination."

The WHO said Monday it will continue providing the Ebola vaccine "to all people at high risk of Ebola infection incl. Those who have been in contact with a person confirmed to have Ebola."