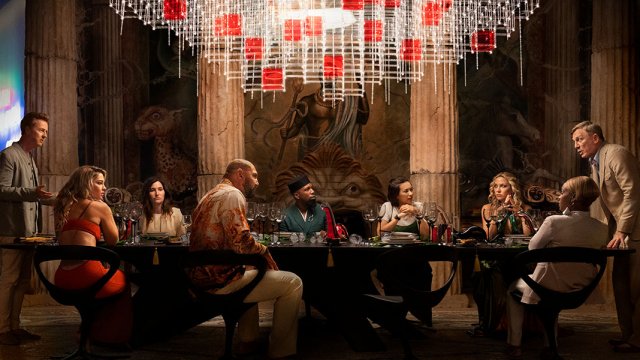 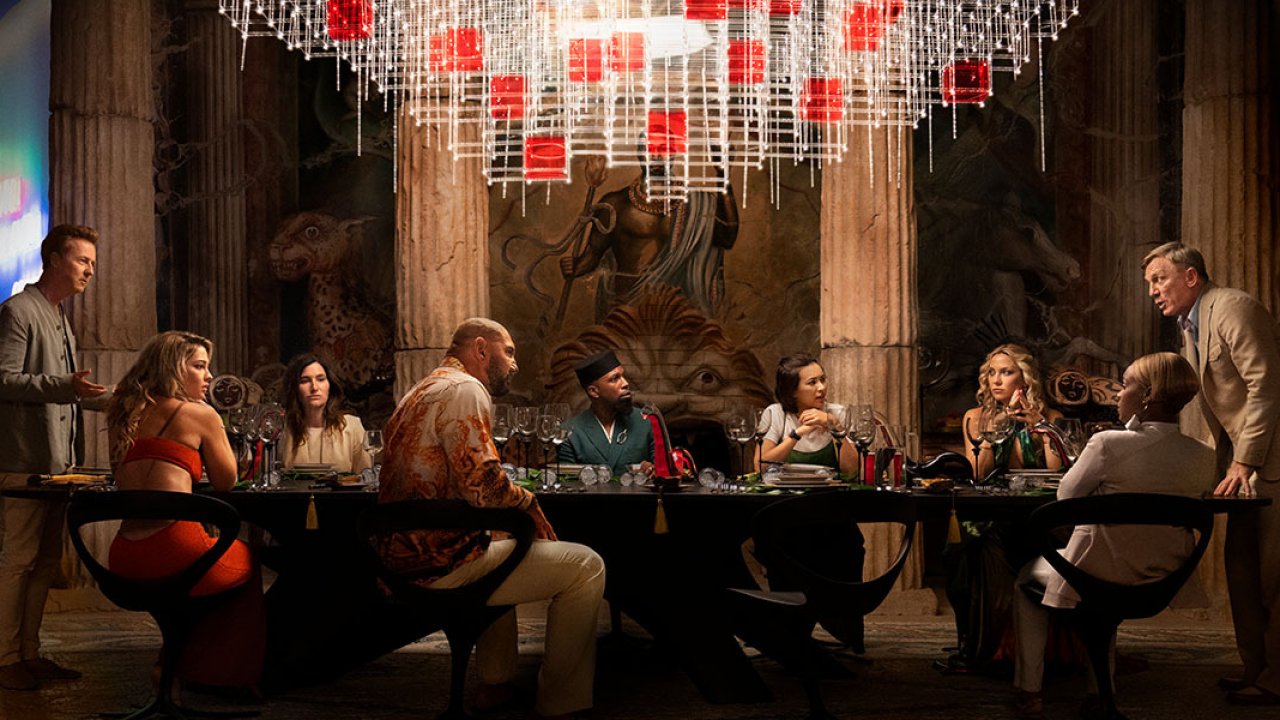 “It’s so dumb!” - Daniel Craig in one of the more entertaining scenes of “Glass Onion: A Knives Out Mystery”, but also an accurate description of how I felt for stretches of the sequel to 2019’s widely beloved “Knives Out.” That’s OK, though. While "Onion" lacks the same charisma, charm and wit as its predecessor, it’s still undoubtedly a crowd pleaser that buzzes along despite a 139-minute runtime.

Craig’s shtick as renowned detective Benoit Blanc is perhaps even more fun this time around. Rian Johnson is also back as writer/director, with a new murder mystery that, to his credit, has an entirely distinct setup from the last film.

A group of friends (Janelle Monáe, Kathryn Hahn, Leslie Odom Jr., Kate Hudson, Jessica Henwick, Dave Bautista, Madelyn Cline), all successful in their very different careers, receive an invitation in the mail. Their ultra-rich tech buddy, Miles Bron (Edward Norton), is inviting them to stay at his remote Greek island to solve his own murder — as in a dinner party murder mystery. (Blanc also gets an invite, though Bron swears he never sent him one. Blanc would like a prize… perhaps an iPad… for whoever solves the mystery). But when this much wealth, privilege and ignorance among friends considered “disrupters” in their respective fields gathers under one roof, something bad is bound to happen. It does, of course – just not in the way, or when, we expect. And so, we’re off.

Johnson ratchets up the comedy in “Glass Onion” to mixed results. The first third of the film is an unwelcome (and unnecessary) reminder of pandemic lockdowns and mandates, along with an over-reliance on spoofing the ultra-wealthy. Of course, lampooning the ignorance of privilege is part of the fun of both "Knives Out" movies, but some of the satire in this case is so on the nose that it feels patronizing. You can almost feel Johnson elbowing the audience saying, “Rich people, am I right or what?!” There must be a more creative, thoughtful way to riff on toxic greed and influencer culture than, for instance, Hudson’s character casually tweeting an antisemitic remark because she’s a self-proclaimed "truth teller." These types of punchlines are neither nuanced nor outrageous enough to be particularly funny.

The hit-and-miss nature of the laughs isn't helped by a cast of characters I just never wanted to spend time with. Johnson mostly gives his actors caricatures to work with, and the dialogue does a little too much winking to the audience for its own good. Again, both “Knives Out” movies featured mostly unlikeable characters. I found the first bunch deplorably fun, while I wouldn’t want to RSVP to a party with this crew — even on a Greek island with a literal onion-shaped glass room.

Along with Craig, Monáe is excellent as Andi Brand, the lone member of the friend group with a soul. Monáe is asked to carry large parts of the movie. She succeeds, giving us some of the most intriguing moments of the film as the puzzle pieces come together. Norton also completely works playing the insufferably snobbish genius who feels compelled to rent the actual Mona Lisa from The Louvre (the museum needed some money during the pandemic) just to remind his friends — and himself — how impressive he is. The entire ensemble, really, understands the assignment here. This is a big, ridiculous, meta whodunnit. The talent of the main cast (plus fun cameos!) is not in question.

The good news is "Onion" begins to click once we get all the unpleasantries of meeting these unsavory characters out of the way and the mystery plot kicks in. The more screen time for Craig and Monáe, the better. Johnson clearly recognizes what he has with the pairing, not unlike Craig and Ana de Armas in 2019. Their chemistry is delightful, and their comedic moments feel organic and earned.

What starts as Johnson's forced attempt to show he can still subvert the murder mystery genre with biting social commentary turns into another fun trip through the peculiar mind of one Benoit Blanc. “Glass Onion” is consistently entertaining; and just as Johnson said after the TIFF premiere that he’ll keep making these movies until Craig blocks his number, I’ll keep watching Craig have fun in this role. I can’t help but feel, though, that this second entry into the franchise suffers a bit from the Netflixification of cinema, with a baseline level of competence from everyone involved in a big-budget production that’s just serviceable; you stream it and move on. At least that iPad will come in handy.