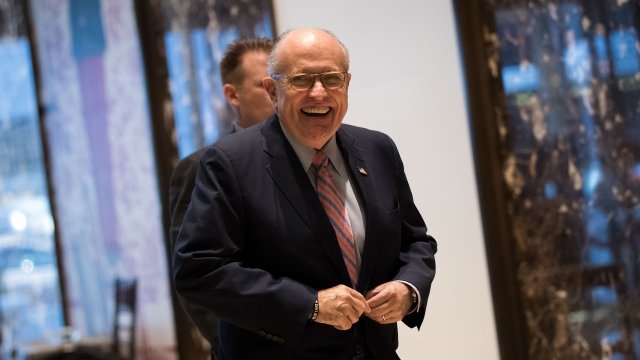 SMS
Giuliani: No Mueller-Trump Interview Without FBI Informant Documents
By Gabrielle Ware
By Gabrielle Ware
May 29, 2018
Rudy Giuliani says President Trump's legal team needs all the documents about an FBI informant before agreeing to a special counsel interview.
SHOW TRANSCRIPT

President Donald Trump's lawyer Rudy Giuliani said he won't grant special counsel Robert Mueller an interview with Trump before his legal team gets to review all documents related to an FBI informant.

Trump has accused investigators of "secretly gathering information" on his campaign. He tweeted last week, "SPYGATE could be one of the biggest political scandals in history!"

An FBI informant assisted in the Russia investigation and had contact with Trump campaign advisers, but officials haven't found any evidence of spying on his campaign.

Giuliani told The Washington Post, "We need all the documents before we can decide whether we are going to do an interview."

Guiliani has been reluctant to agree to a sit-down between the president and the special counsel, but he has negotiated with Mueller about possible terms for an interview.