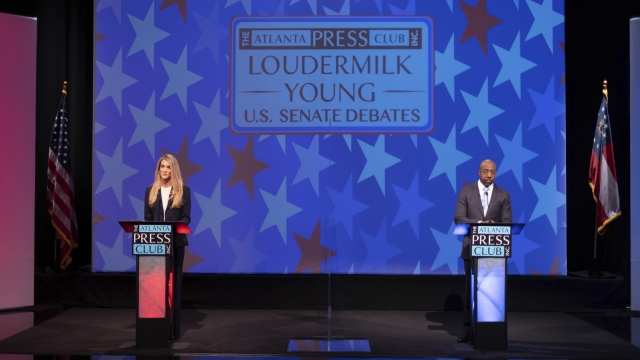 In just under one month, voters in Georgia will determine whether Democrats or Republicans will control the Senate. Two runoff elections are on January 5th.

Three of the four candidates took the debate stage last night. In the face-off between Republican Senator Kelly Loeffler and her Democratic opponent, Reverend Raphael Warnock, the presidential election took center stage, with Loeffler refusing to acknowledge President-elect Joe Biden as the winner.

Kelly Loeffler continues to cast doubt on an American

Democratic election. It's time to put this behind us and

get focused on the concerns of ordinary people."

has every right to use every legal recourse available

in our own state. We've seen time and again

that we have investigations that need to be completed."

Some tense moments there. Quite the opposite in the match-up between Republican Senator David Perdue and Democrat Jon Ossoff — that's because Perdue didn't show up. He declined to participate ahead of the event.

Democrat Jon Ossoff "My message for the people of

our state at this moment of crisis is your senator

feels entitled to your vote. Your senator is refusing

to answer questions and debate his opponent because he

believes he shouldn't have to."

Ossoff took aim at Perdue's stock trading activities, which have been at the center of controversy. Perdue's team responded, saying Ossoff quote "Lost a debate against himself."