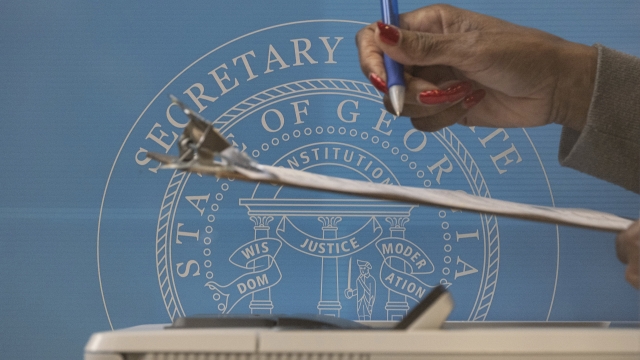 SMS
Georgia Senate Runoffs Awash With Election Misinformation
By Tyler Adkisson
By Tyler Adkisson
December 30, 2020
Some studies show that roughly half the Twitter hashtags used about Georgia in early December implied some kind of voter fraud in the state.
SHOW TRANSCRIPT

Georgia is being flooded with election misinformation ahead of its Senate runoff races, with much of it focused on voter fraud.

"[We've seen] a couple of different threads — the idea of the election itself was not reliable and that a future election will not be reliable," said Dr. Amanda Sturgill, associate professor of journalism at Elon University and author of "Detecting Deception: Tools to Fight Fake News."

She continued, "This is part of a Georgia-specific narrative but also part of a larger narrative, particularly around the presidential election in the swing states."

Social media has been a main source of the mis- and disinformation. According to nonpartisan research organization Advance Democracy, as of early December, Twitter has seen an average 1.5 million posts a day on the Georgia runoff race. Of the top 10 hashtags used in tweets about Georgia, half have implied voter fraud.

Those claims haven't been supported by evidence. But efforts to correct this false election content on social media haven't been robust.

Runoff candidates have been the source of false information spreads, too.

"We find with the candidates is that they are repeating the claims of the attacks that they made," said Tom Kertscher, a reporter at PolitiFact covering the runoff elections. "So they might first appear in a TV ad, but then the attacks will be repeated on Twitter or in an interview or another media."

For instance, Sen. Kelly Loeffler has repeatedly made the claim that Democrat Raphael Warnock wants to open up prisons by eliminating cash bail, when in reality he wants to do sentencing reform. Warnock has also falsely accused Loeffler of doing an interview with a white supremacist on One America News Network, a claim that was debunked by PolitiFact.

Platforms are actively trying to clamp down on these false claims, though. Facebook says it will label content that tries to delegitimize voting in the Georgia runoff elections, like claims that say that vote by mail leads to fraud. Twitter says it labels or removes false information about how to participate in the election.

Sturgill said that while these debunking efforts may help, efforts to spread misinformation about the election may spread farther and stick with people more than corrective information.

"There's going to be too many efforts to spread bad information to have technical solutions that work well and work consistently," Sturgill said. "Those first impressions that they get, they kind of tend to stick. So even if it's something that gets sent and you see it one time and it turns out to later be proven false, you may not see the debunking later that will happen."

Experts say you should do a gut check whenever you see a fact that sparks a strong emotional response.