Georgia Republicans Aim to Limit Mail-In Voting Ahead of Runoffs 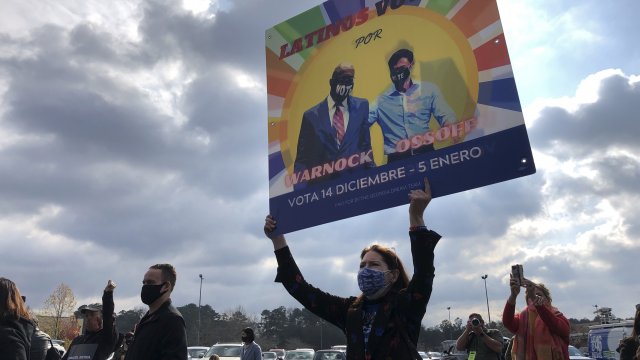 The party outlined a plan that would curb no-excuse absentee voting and add a voter ID requirement.

Georgia Republicans are trying to add restrictions to voting in a legal challenge that could lead to last-minute changes and confusion for voters ahead of the January 5 runoff elections for two U.S. Senate seats.

The party outlined a plan that would curb no-excuse absentee voting and add a voter ID requirement for eligible voters. It would also eliminate ballot drop boxes at a time when the state has already accepted tens of thousands of absentee ballots for the runoff.

The GOP is attempting to alter the absentee voting system that was passed by Republican lawmakers themselves in 2005. But the party filed three lawsuits this week against the Republican secretary of state and other election administrators. The suits seek additional reviews of absentee ballot signatures - which President Trump has demanded.

Multiple academic studies - and the president's own voter fraud commission - have revealed no evidence of voter fraud in the 2020 election, including with drop boxes. And experts say restrictions sought by the GOP only suppress the vote, particularly for people of color hoping to access an already secure absentee voting system.

Meanwhile, the GOP has called for an investigation and another audit of the Nov. presidential election results after two recounts already certified Joe Biden's win in Georgia by more than 12,000 votes.

Though he's the subject of one of the lawsuits, Georgia's Secretary of State agrees with the additional restrictions and says he wants to change the state's signature verification process. Still, he's reiterated that there's no evidence the election was fraudulent.

"I know there are people that are convinced the election was fraught with problems, but the evidence, the actual evidence, the facts tell us a different story," Brad Raffensperger said.

For now, election administrators will continue to follow the current verification process until the legislature can meet to make changes.