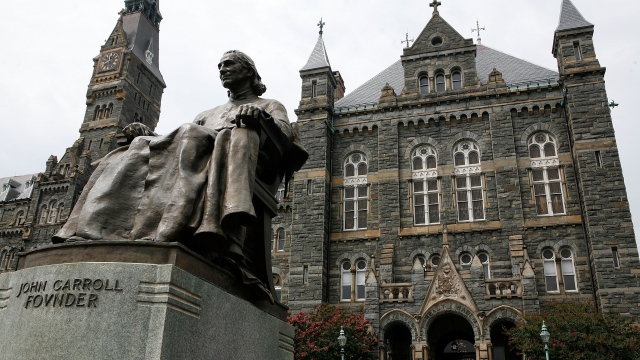 By Ben Lawson
September 1, 2016
Georgetown University says it will give descendants of slaves the same admission advantages it grants to students of alumni.
SHOW TRANSCRIPT

Georgetown University is taking steps to atone for its historical ties to slavery.

The plan includes giving the descendants of slaves the same admissions advantages that children of alumni receive. Two buildings on campus will also be renamed.

One will honor Anne Marie Becraft, an African-American woman who opened a school for black girls in the Georgetown area, and the other will commemorate one of the slaves sold to help pay off the university's debt.

SEE MORE: Businesses Around The World Are Still Profiting From Slave Labor

In 1838, Georgetown University sold 272 slaves to pay off some of the school's debt. The slaves were uprooted from Maryland and sent to Louisiana.

The university has addressed its history with slavery before. But, recently, a committee appointed to determine how the university should address its history found that slavery was deeply rooted in Georgetown's founding.

Profits from the sale of slaves and from plantations run by slaves were a planned source of funding for the school, and many of the campus' early buildings were built, at least in part, by slaves.

Georgetown's investigation started in August, and the student body began putting pressure on the university last year to open a dialogue about its history with slavery.

The steps announced this week stopped short of calls for scholarships for the descendants of slaves, but the university claims its efforts won't end with Thursday's announcement.