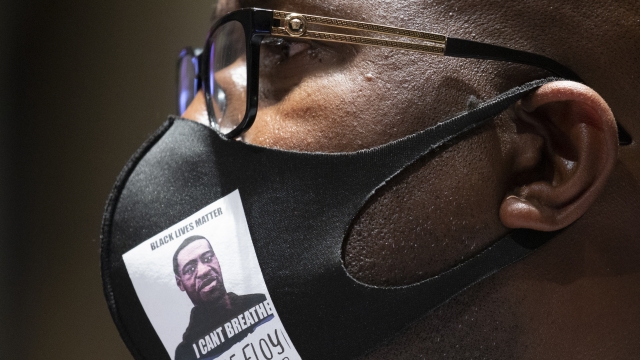 Floyd has testified on Capitol Hill, spoken to the president and led a moment of silence at the DNC, all in the name of justice for his big brother.

It has been a whirlwind of a year for Philonise Floyd.

FLOYD: "Hey, I was a truck driver before all of this. And just like when you're driving, you keep on trucking. I will keep on fighting for justice the same way."

Floyd has testified on Capitol Hill, spoken to both the outgoing and incoming presidents and led a moment of silence at the Democratic National Convention, all in the name of justice for his big brother.

But in a matter of weeks, justice for George Floyd will be out of Philonise's hands. Opening statements for Derek Chauvin's murder trial start this month.

JAMAL: "One of the things that always comes with these trials, and I've covered a few of them, is disparaging the victim. There's going to be a lot of talk of criminal records and whatever drug history. Is that something that you've thought about? Are you ready for that?"

Philonise Floyd told me that he has faith that a jury will convict officer Derek Chuavin, but history is not in his favor.

According to a Bowling Green State University database, between 2005 and March 2020, 110 police officers nationwide have been charged with murder or manslaughter in an on-duty shooting. Less than half — 42 — were convicted.

Since George Floyd's death, the officers who shot Breonna Taylor, Daniel Prude and Jacob Blake have all avoided criminal charges.

Last week, the U.S. House of Representatives passed the George Floyd Justice in Policing Act. The expansive police reform bill that, among other things, bans chokeholds and no-knock warrants at the federal level, and overhauls the qualified immunity legal protections for police officers.

Now the bill moves on to the Senate, where it faces an uphill battle despite Democratic control. But Philonise Floyd believes it shouldn't have taken this long for lawmakers to get serious about police misconduct.

FLOYD: "The fact that it sat on someone's desk collecting dust, you know, after a tragedy that we had. This was not a local thing, this is a global thing. … The leaders need to look and see what's going on and understand that, hey, we have to fulfill this. We have to do the right thing."

Derek Chauvin's trial is set to begin March 29. Philonise Floyd and his family plan to be there.