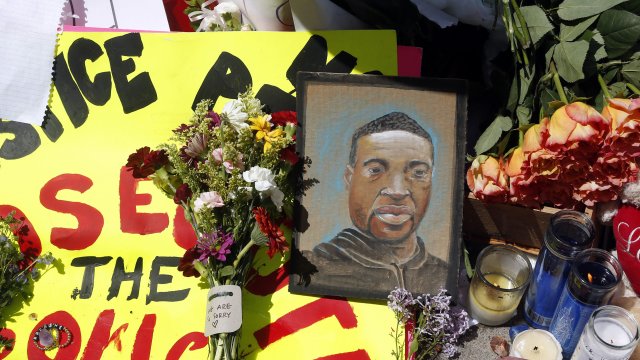 SMS
George Floyd Joins A Series Of High-Profile 2020 Police Killings
By Jamal Andress
By Jamal Andress
May 27, 2020
A string of high-profile police killings strikes a similar tone to 2014, when Michael Brown, Eric Garner, Tamir Rice and others were killed by police.
SHOW TRANSCRIPT

George Floyd died after a Minneapolis police officer used his knee on Floyd’s neck to pin the man to the ground for more than seven minutes. Tuesday, community members took to the streets.

"I believe what I saw and what I saw was wrong at every level," Minneapolis Mayor Jacob Frey said.

Floyd is just the latest in a series of controversial deaths involving a black victim and a white officer or vigilante this year — reminiscent of a similar string of killings six years ago.

In 2014, Eric Garner, Michael Brown, Laquan McDonald and Tamir Rice were all killed within six months of each other. This string of tragedies at the hands of police officers gave way to outrage and protests and helped solidify the Black Lives Matter movement. This year, a similar group of killings has emerged.

Ahmaud Arbery was killed in February in Georgia, but his case didn't gain national attention until this video was released showing Gregory McMichael and his son Travis McMichael chasing and ultimately shooting Arbery while he was out for a jog.

In Louisville, protests have continued on and off for weeks in reaction to the shooting of Breonna Taylor, who was killed during a police raid of her apartment in March. In a wrongful death lawsuit, Taylor's mother said the police didn't announce themselves before entering and no drugs were found in the apartment.

And, most recently, George Floyd, who pleaded to police officers, "I can't breathe" before suffocating on the pavement — like Eric Garner six years before.

"The tragedy of Eric Garner was the fact that it was a nonviolent allegation of him selling loosie cigarettes. Well, that's the same thing we have here with George Floyd, allegations of a nonviolent forgery charge," George Floyd family's attorney, Ben Crump, said.

And while police-involved shootings have gained a higher profile over the past six years, they haven't slowed down.

According to a Washington Post database, U.S. police killed more people in 2019 than in 2015, and that number has hovered around 1,000 people for five years straight.

"This last couple of weeks with Ahmaud Abrey, Breonna Taylor and now George Floyd, what it tells you is it was probably just as many killings as last month and the month before that, but they just weren't captured with objective evidence," Crump said.