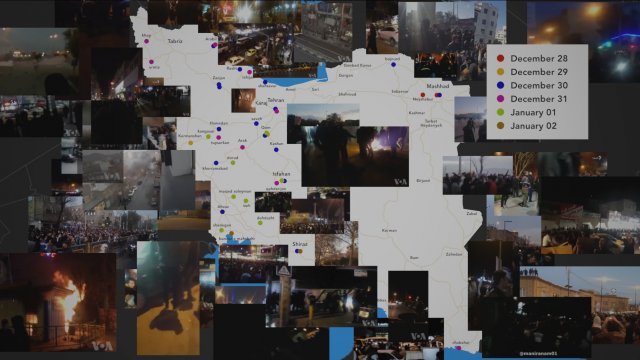 "Many who protested wanted a better life. But almost all who protested believed that their basic rights were not being met." — Behnam Ben Taleblu

The protests started in Iran's northeastern city of Mashhad. From there, they spread across the country. They've gone on more than a week.

The White House is voicing support for anti-government protesters in Iran after days of demonstrations left 20 dead and hundreds arrested.

When the protests started, they were mainly made up of urban poor. But, as the demonstrations grew, the kinds of people protesting did as well.

During Iran's Green Movement in 2009, millions in the middle class protested in Iran's capital of Tehran after a disputed election. That was the last time major protests swept through the country. These recent protests are smaller, but they're also hitting in many more places than during the Green Movement.

"While the protests now compared to 2009 are smaller in scale because of their wide geographic scope, I think it's much more representative of the sentiments of the Iranian population," he said.

The catalyst for the recent demonstrations seems to be from a budget proposal Iran's President Hassan Rouhani released. Part of it revealed that billions of dollars were going to unaccountable hard-line groups and military factions, like the Islamic Revolutionary Guard Corps.

Rouhani has responded to the protests with calls for unity and calm. Iran's Supreme Leader Ali Khamenei had a different view, suggesting foreign agents are behind the protests.

"For over a century, Iranians have been on a quest for national emancipation, economic rights and social justice. What we know for certain is that these protests are a result of the 2009 protests. And if these protests fizzle out or are crushed, we will know one thing else for certain: There will be yet another movement that demands the same thing," he said.