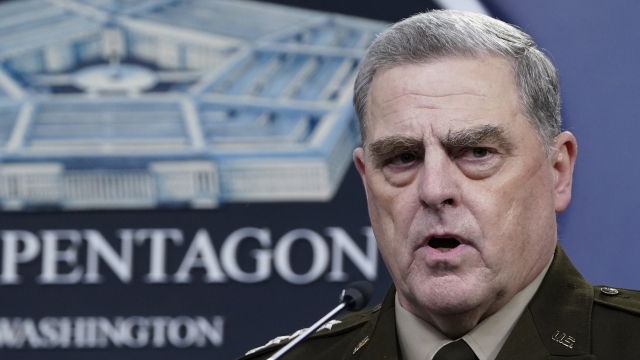 Gen. Mark Milley, Chairman of the Joint Chiefs of Staff, is under fire for two calls he reportedly made to his Chinese counterpart during the final months of the Trump administration seeking to reassure the U.S. would not strike China.

Milley allegedly made the calls over concerns about actions former President Trump might take.

"If we're going to attack, I'm going to call you ahead of time. It's not going to be a surprise," Milley reportedly told General Li of China.

It's just one revelation in a new book called "Peril" written by journalists Bob Woodward and Robert Costa.

In the book, Milley also reportedly agreed with House Speaker Nancy Pelosi in a phone call that President Trump suffered mental decline after his election loss.

Trump and his allies were quick to criticize Milley.

"If it is actually true – which is hard to believe that he would have called China and done these things and was willing to advise them of an attack or in advance of an attack – that's treason," Trump said.

Some Republicans said the general should be removed but others, like Arkansas Sen. Tom Cotton, defended Milley and called on him to discuss the reports at an upcoming hearing.

"General Milley and Sec. Austin are going to be testifying in front of Congress in just a few days and we'll address these concerns we don't want to jump to conclusions yet," Cotton said.

In a statement on Wednesday, a spokesperson for Milley did not deny the report but stated the calls were focused on conveying reassurance and strategic stability.

President Biden briefly touched on the situation during a meeting with business leaders.

He said, "I have great confidence in General Milley."

Milley is set to appear before the Senate Armed Services Committee in late September.