This Dutch Politician Was Just Convicted Of Inciting Discrimination 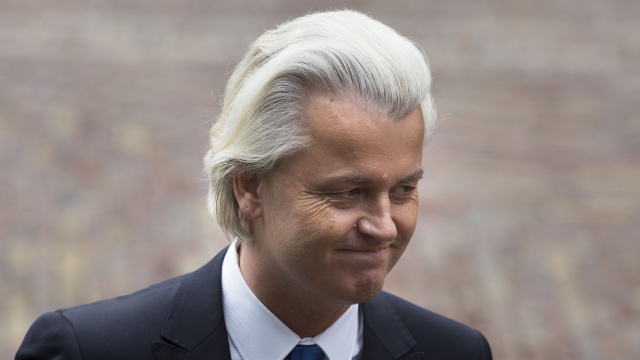 "The Dutch want their country back," Geert Wilders said in a video message.

Wilders is the leader of the far-right Party for Freedom, and he wants to make the Netherlands great again. He even has a shot at becoming the country's next prime minister.

And he was just convicted of insulting a group of people and inciting discrimination.

It all stems from the comments he made at this rally in 2014. Wilders asked the crowd whether they want more or fewer Moroccans in the Netherlands. The crowd chanted "fewer."

Wilders claims the Netherlands has a problem with crimes committed by Moroccans. Moroccans make up just over 2 percent of the population.

Wilders faced similar charges for anti-Islam comments in 2011, but he was acquitted.

"You have restricted the freedom of speech of millions of Dutch, and hence, convicted everyone. No one trusts you anymore," Wilders said of the judges who convicted him in a video address to his supporters following his conviction Friday.

In spite of his conviction, he did have a partial victory in the trial. The court didn't impose any penalties, saying the trial was damaging enough. And he was found not guilty of a charge for inciting hate related to another incident.

The case could actually help drum up support for Wilders. Like in Germany, France and the United Kingdom, the Netherlands has seen the rise of far-right and populist views.

In his closing arguments, Wilders even cited the U.K.'s Brexit vote and the recent U.S. elections as examples of the "worldwide movement" that "puts an end to the politically correct doctrines of the elites and the media which are subordinate to them." He's even used the hashtag #MakeTheNetherlandsGreatAgain.

The Party for Freedom is currently leading in the polls. If the party picks up the seats it's currently projected to get, Wilders would likely become the next prime minister.