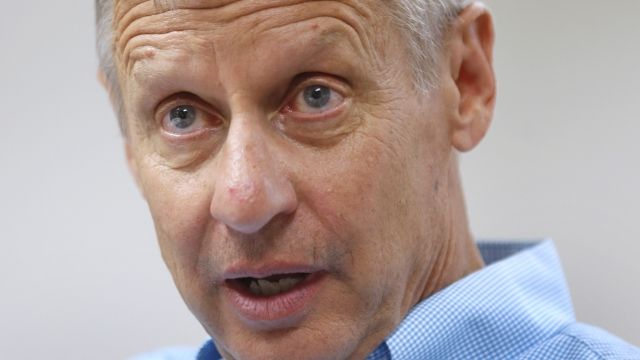 SMS
Whoops: Gary Johnson Just Had Another 'Aleppo Moment'
By Briana Koeneman
By Briana Koeneman
September 29, 2016
During an interview with MSNBC, Johnson was asked to name his favorite world leader. And it didn't go well.
SHOW TRANSCRIPT

Gary Johnson has done it again.

On MSNBC on Wednesday, Johnson was asked to name his favorite world leader.

"I guess I'm having an Aleppo moment in the former president of Mexico," Johnson replied.

"But I'm giving you the whole world!" Matthews said.

Seems like a softball question. But Johnson struggled with his answer.

"Anybody. Pick any leader," Matthews said.

"Which one?" Matthews asked.

Of course, the media seized on Johnson's latest "moment."

But his campaign manager stood up for him. He wrote on Facebook, "This is gotcha-ism at its finest."

Johnson is currently polling at about 7 percent in the Real Clear Politics average.

Johnson has said America should stay out of foreign interventions. He also thinks the U.S. should take in its share of Syrian refugees.

Here's hoping that next interview goes a little smoother.