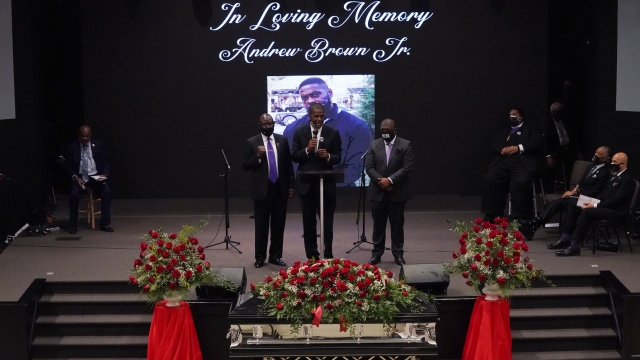 SMS
Funeral Held For Andrew Brown Jr. In North Carolina
By Jay Strubberg
By Jay Strubberg
May 3, 2021
Family members of other Black men who died at the hands of police spoke at the service in a show of support.
SHOW TRANSCRIPT

Loved ones and mourners gathered at a funeral today for Andrew Brown Jr.

Family members of other Black men who died at the hands of police spoke at the service in a show of support.

Demands are growing for the release of officer body cam footage in the Brown case.

The Rev. Al Sharpton delivering a eulogy and pushed back on Sen. Tim Scott's comment that America is not a racist country. The reverend said police violence against Black Americans is the systemic racism we're dealing with today.

"In these times, in these times, the challenge of these times is how we're going to deal with policing in America and restoring the right to vote," Sharpton said. "If those of you that call yourself preachers can't preach to these times then you need to sit down and shut up and let somebody stand up in Jesus name and talk about the sign of the time."

Brown was shot and killed by sheriff's deputies almost two weeks ago. They were serving warrants on drug-related charges but details about the case remain scarce.