After MLB Star's Death, Friends And Teammates Remember Him With Love 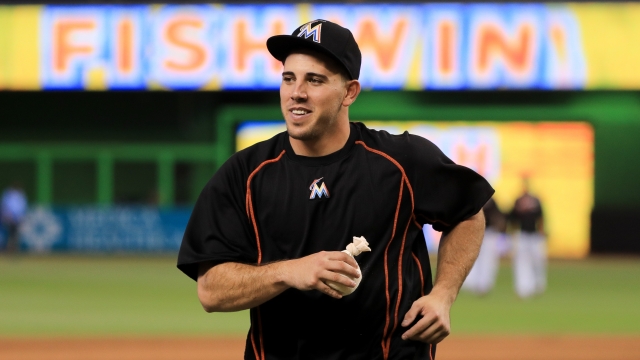 SMS
After MLB Star's Death, Friends And Teammates Remember Him With Love
By Carter Woodiel
By Carter Woodiel
September 25, 2016
Ask those who knew José Fernández well, and they'll probably tell you how much fun he had on the baseball field.
SHOW TRANSCRIPT

"You just see that little kid that you see … when you watch kids play Little League, something like that; that's the joy that José played with," Miami Marlins Manager Don Mattingly said, holding back tears.

The baseball world was in shock Sunday after news broke that Miami Marlins pitcher José Fernández died in a boating accident. Fernández, who was 24, was considered one of the best young pitchers in the major leagues.

There's one thing a lot of people said as they remembered Fernández: He always had a good time on the baseball diamond.

"He had already done everything else. All he wanted to do was just have fun and be on that mound and play the game — not work the game — play it," said ESPN analyst Eduardo Pérez, a former Marlins coach. "And he played it beautifully."

Los Angeles Dodgers player Yasiel Puig, who, like Fernández, hails from Cuba, paid his respects on Twitter, saying, "Hermano, wherever you are, you know how much I loved you."

Like other Cuban-born ballplayers, Fernández needed to defect to the U.S. to play in the majors. He was imprisoned at 14 for trying to flee the country before he and his mother managed to escape a year later. Last year, he became an American citizen.

Fernández struggled with injuries at times during his career, but he was an All-Star performer when he was on the mound. In four years with the Marlins, he had a 2.58 ERA and over 11 strikeouts per nine innings.

In his final MLB start on Sept. 20, Fernández pitched eight shutout innings with just three hits, no walks and 12 strikeouts. One of his teammates says Fernández told him it was the best start of his career.