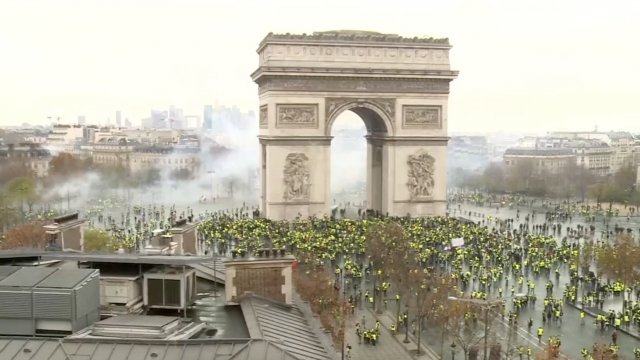 Protests in France over rising fuel costs, the cost of living and Emmanuel Macron's presidency have continued for the third week in a row.

The so-called "Yellow Vests" clashed with police, setting fire to cars and buildings. Law enforcement in Paris used tear gas, stun grenades and a water cannon to disperse demonstrators, who were throwing projectiles.

Hundreds of people have been arrested and dozens more have been injured in the fray.

France's interior minister said as of midday on Saturday there were 36,500 demonstrators throughout the country. CNN reports more than 50,000 participated last week and that double that number turned out the week prior, though some outlets estimate the numbers are much higher.

Macron's tax hike on diesel fuel and gasoline is set to go into effect on Jan. 1. The French president says the taxes are necessary to decrease the country's carbon emissions. So far, Macron has reportedly refused to reconsider the tax amid the protests.