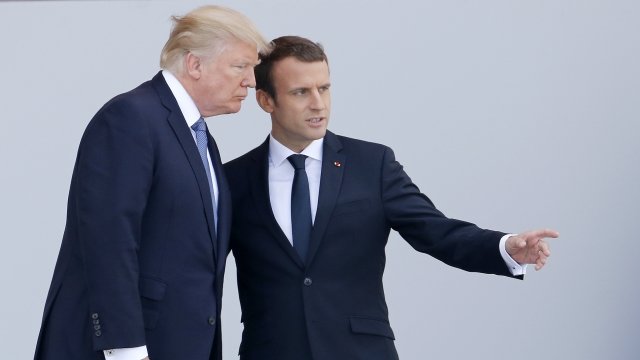 SMS
Macron Could Really Use A Win From His State Visit To The US
By Matt Picht
By Matt Picht
April 23, 2018
The increasingly embattled French president reportedly plans to try to sway Trump on issues like trade and the Iran nuclear deal.
SHOW TRANSCRIPT

French President Emmanuel Macron is facing more and more resistance at home. But the embattled leader could score a win during his first state visit to the U.S. — by swaying President Donald Trump's "America First" foreign policy.

The date likely to be at the forefront of Macron's mind is May 12. That's Trump's self-imposed deadline for deciding whether or not to leave the international deal constraining Iran's nuclear program.

Trump's demanded significant changes to the deal, but he probably won't get them. Convincing Trump to uphold the agreement anyway would be a diplomatic coup for Macron.

A more immediate deadline comes May 1, when Trump has to decide if he'll keep exempting the European Union from his steel and aluminum tariffs. 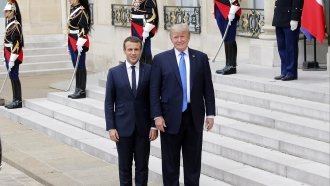 The Trump Administration Gears Up For Its First State Dinner

Macron is reportedly teaming up with German Chancellor Angela Merkel to convince Trump not to implement the tariffs. Securing that exemption would give Macron a clear example of how his close relationship with Trump has paid off for France.

And Macron could really use the win: He's currently facing mass labor strikes over his planned reforms, and his party recently splintered over a controversial immigration bill. A diplomatic victory with the U.S. could help tamp down some of that dissent.

But Macron also has to be careful how he uses his relationship with Trump to score points. After the U.S. and France teamed up to carry out airstrikes in Syria, Macron fended off a tough TV interview by saying he'd convinced Trump to get more involved in Syria. He later walked back those comments after pushback from the White House.