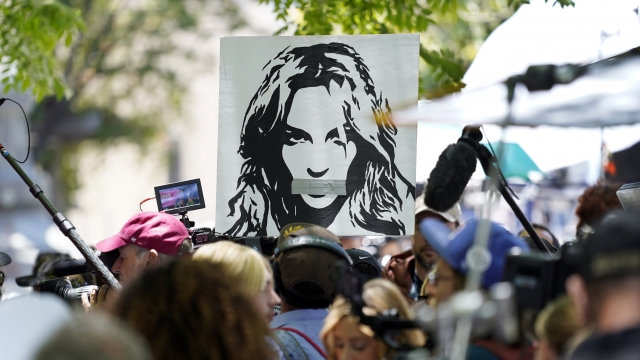 Kerri Kasem, daughter of Casey Kasem and founder of Kasem Cares: "Out of every movement and every advocacy group, the Free Britney movement has gotten guardianship reform and the abuses out there more than anyone."

#FreeBritney may center around pop star Britney Spears — but the issue at the heart of the movement affects families around the country.

Rick Black, director of the Center for Estate Administration Reform: "There are approximately 1.5 million vulnerable adults under conservatorships, guardianships in the country today."

Both the Center for Estate Administration Reform and Kasem Cares are advocacy groups working to reform conservatorship laws and protect people from elder abuse. Kasem Cares was named after the late radio personality and voice actor Casey Kasem, who lived under a conservatorship until his death in 2014.

Kasem: "Nobody deserves to have everything stripped of them when they've worked so hard. And not only people like Britney Spears, my father Casey Kasem, Glen Cambell, B.B. King, Mickey Rooney… This is happening to thousands and thousands of families across the country and they need your help."

Activists from the groups stood alongside #FreeBritney protesters in L.A. as Spears revealed to a judge the lack of freedom she’s had over her own life. Because of her conservatorship, Spears said she is unable to freely leave her home. She's been put on medication without her consent, and she's restricted from marrying or having more children.

Conservatorships, also called guardianships, are designed to protect those who can't take care of themselves or may be an easy target for fraud. Spears’ conservatorship is now the most high-profile case in the country. And her fans have learned more about the issues that can arise from them, such as theft of assets, neglect, and a loss of legal power that can make it difficult to escape the oversight.

#FreeBritney supporter Rachel Schell: "I didn't understand that until this movement started, and now I'm like 'Oh my gosh, so many people are being abused by this.'"

#FreeBritney supporter Megan Radford: "We started connecting with probate reform advocacy groups and legislators and all kinds of people who are not Britney-specific...It just turned into something that I realized was a systematic issue."

Going forward, as #FreeBritney supporters continue to rally for Spears' freedom, they also plan to protest for reforming conservatorships overall.

Grant Rutter, host of the podcast Grant Rants Hollywood Talk: "Whether they're a fan of Brittney or not, they are learning something about this system that perhaps should be addressed."

Radford: "It's been a really cool thing to see something start as this very grassroots, very small fan movement, and really become a social justice movement."