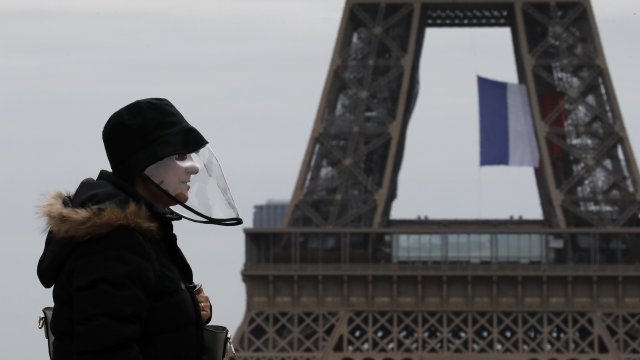 France's famous Champs-Élysées is reopening this week, but with one thing missing: tourists. The move is part of France's gradual easing of its coronavirus lockdown. Hairdressers, shops and many other businesses are reopening, but with mandatory safety rules.

"I have spaced out all the seats, leaving one meter between them. I’ve sealed off half the seats. The salon could hold eight customers, now it’s only four," said Stéphanie Silva, owner of a hair salon in Paris.

Public transportation is slowly increasing service, and authorities are distributing free masks at some train stations. The government is also asking people to avoid commuting during rush hour unless it's absolutely necessary.

"Usually I start at 8 a.m., and these days I prefer to start at 10 a.m. I know that there are less people in the metro at this time," said Karima, a metro commuter.

To reduce crowds in the metro, Paris is also opening new biking routes.

"I will definitely use the bicycle and avoid taking the metro or the subway," said Claude, a cyclist.

Now, one of France's most contentious measures is the reopening of classrooms, starting with many primary schools this week. The government insists that it's necessary to help underprivileged students. But for now, parents can decide for themselves if they prefer to keep children home or send them to school or child care.

"They separate the children in different groups, and of course they wash their hands all the time and have disinfection measures. So I guess that’s enough," said Marion after dropping her kids to a local nursery.

To guide its national reopening plan, France has separated the country into green and red zones based on COVID-19 presence. The red area, which includes Paris, will have to wait longer before reopening bars, restaurants, cinemas and high schools.

This comes after a month of steady decline in hospitalizations and number of new cases. But with over 26,000 deaths, France has been hit hard by the virus. So is it risking a second wave by lifting restrictions too early? Time will tell.