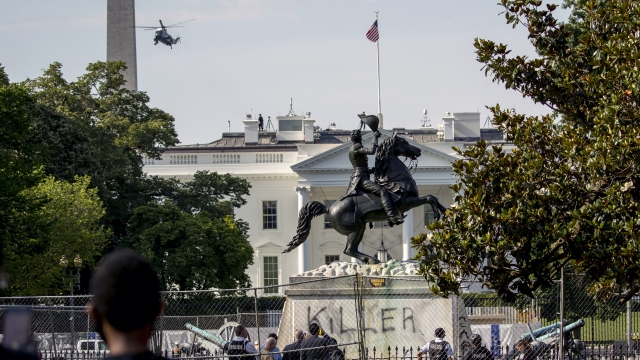 SMS
Four Charged With Attempting To Remove Andrew Jackson Statue in DC
By Caitlin Baldwin
By Caitlin Baldwin
June 29, 2020
Prosecutors say they have video of four men trying to pull down the statue near the White House on June 22.
SHOW TRANSCRIPT

Four men are being charged with attempting to pull down a statue of former President Andrew Jackson in Washington, D.C. near the White House.

In a criminal complaint unsealed Saturday, the Department of Justice said video shows Lee Michael Cantrell, Connor Matthew Judd, Ryan Lane, and Graham Lloyd attempting to topple the statue in Lafayette Park using a wooden board and yellow strap. They're being charged with destruction of federal property and face as many as 10 years in prison.

The U.S. Attorney’s Office for the District of Columbia said it "will not stand idly by and allow our national monuments to be vandalized and destroyed," adding that the charges should serve as a warning that violent behavior and criminal conduct will not be tolerated.

Protesters have been demanding statues of historical figures associated with racism be taken down and in some cases, have taken matters into their own hands.

Jackson was a Tennessee slaveholder and general in the U.S. Army who signed the Indian Removal Act into law in 1830 as president. The act led to about 100,0000 Native Americans being moved west of the Mississippi River. Thousands died along the way.