Former Presidents Are Pushing For Democracy 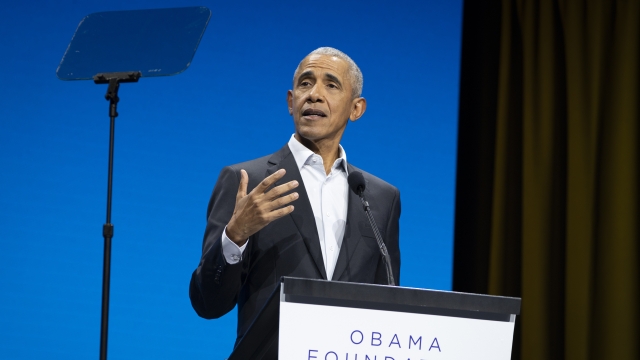 Former Presidents Barack Obama and George W. Bush both called for support of democracy at home and abroad.

Following a midterm cycle where democracy was said to be on the ballot, its future at home and abroad is still very much up for debate.

"These democratic ideas are currently under assault around the world. We see it in the backsliding that’s taking place in well-established democracies, we see it in the escalating polarization and disinformation that’s so evident in recent elections," said former President Barack Obama.

Obama and Former President George W. Bush both held forums this week looking at how to handle these changes all over the world. In New York, Obama said part of his concern is that leaders are tapping into growing fears of the "other" and using it to gain power.

"The threat to democracy doesn't always run along a conservative-liberal left-right axis. This has nothing to do with traditional partisan lines or policy preferences. I believe those of us who believe in democracy have to acknowledge the anxieties and frustrations that rapid economic and cultural and demographic changes have brought. And we're gonna have to figure out how to live together or we will destroy each other," said Obama.

The Obama Foundation Leaders United States program is a six-month leadership development program for emerging leaders between the ages of 24 and 45.

And while the U.S. is typically united in its support for democracy globally, there have been signs of cracks in Washington.

Some members of the Republican Party are calling for an audit of U.S. aid to Ukraine as they prepare to take control of the House. But Bush says the money the U.S. is spending in Ukraine is a drop in the bucket.

"It’s not going to break out budget to support Ukraine. I'm a loyal Republican and I’m going to keep my voice out there regardless of what other Republicans say," said Bush.

Bush made the case during his forum in Dallas that an isolationist America will make the world more dangerous and said supporting Ukraine in its fight for democracy isn’t just in the U.S.'s moral interest.

"What will Europe look like in 10 years if Putin conquers Ukraine? Our mission is to make sure Americans don't get too comfortable in a free society to forget about others," said Bush.

Though neither mentioned former President Donald Trump by name, both drove home the idea that it’s America’s responsibility to help people around the world achieve freedom — even as the fight to keep democracy continues at home.