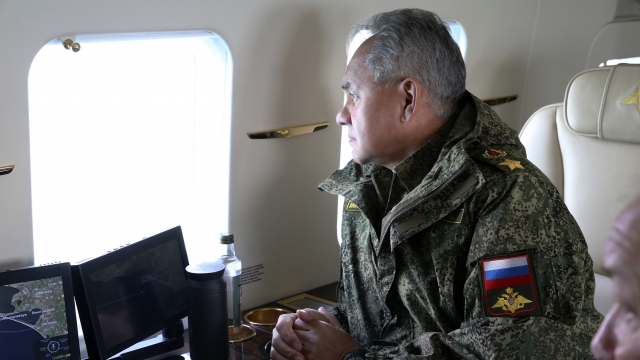 SMS
Experts See Ominous Signals In Russian Pullback At Ukrainian Border
By Sasha Ingber
By Sasha Ingber
April 26, 2021
After a sudden and massive buildup, a former Commander of the U.S. Army in Europe says Russia is "not going to stop until the West stops them."
SHOW TRANSCRIPT

Skepticism from the U.S. … after Russian Defense Minister Sergei Shoigu recently announced a withdrawal of troops massed along the border with Ukraine.

"I don't buy anything that comes from Minister Shoigu or that comes out of the Kremlin. Do they take all the equipment with them, all the logistics that they brought in? And by the way, there are already 30,000 Russian troops before this latest escalation."

That’s retired Lt. Gen. Ben Hodges, who commanded the U.S. Army in Europe. He says Russia keeps getting away with bad behavior. The latest: a brazen buildup of some 100,000 troops — in an area Russia annexed from Ukraine and near a seven-year-old conflict it supports in the country’s east.

"It's a very frustrating sort of pattern. The West has done almost nothing in response to any of the activities by the Russian Federation," says Hodges.

Russia's defense minister says some equipment will remain in the area for planned military exercises later this year. Hodges says the sudden buildup, without challenge, leaves Moscow even more emboldened.

"They're not going to stop until the West stops them," Hodges says.

Weeks ago, the massive arrival of troops and equipment caused alarm and confusion in Washington.

"They could actually be going into a series of exercises, starting at any time. Or they could, if they chose to, perhaps do a limited objective attack — they may take that option. We don’t know what the intent is," testified Lt. Gen. Scott Berrier, Director of the Defense Intelligence Agency, last month.

Now, analysts say the buildup was much more than a snap drill during joint U.S.-NATO exercises — as Russia described it.

"It was clearly intended to send a signal to a new Biden administration of Russia's military capability and its readiness to respond. It was also sending a message to Kiev — to be very careful in terms of their actions," says Paul Kolbe.

Kolbe led CIA operations in the region. He says Russia, under Vladimir Putin, uses conflict to thwart Ukraine’s hopes of joining NATO and the EU. And the timing, scale, and breadth — the heavy artillery battalions and field hospitals — displayed all the crucial elements for a planned attack.

"I think you're going to see tension and periods of conflict with the potential to escalate beyond where anyone would want that to go," Kolbe says.

But some say Kiev needs more diplomatic support, air and missile defense, and secure radio to communicate without Russian interception.

"If you saw things go really south in Ukraine, you could expect as well then to see deep troubles on the borders of of of Poland, of the Baltic states, and destabilizing influence, throughout Western Europe," Kolbe says.