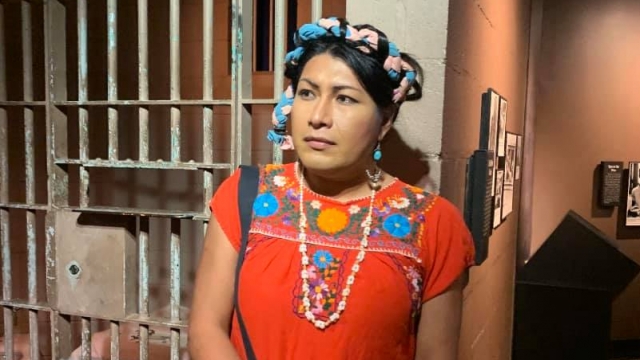 The transgender woman who organized a protest at the president's speech tells Newsy she spent 13 months at three ICE detention jails.

President Biden was interrupted during a Georgia rally on Thursday by protesters urging him to close ICE jails.

In an exclusive interview with Newsy, one of the protesters, a transgender woman from Mexico who spent 13 months in ICE detention, says now is the time for change.

President Biden responded to Sanchez and her fellow activists on stage.

"There should be no private prisons, period. None, period. That's what they're talking about: private detention centers. They should not exist. And we are working to close all of them," he said.

The president then told the hecklers to give him five days. He later clarified to reporters he was "teasing" the activists about the timeframe.

Either way, Sanchez says she'll continue to pressure him to fulfill his campaign pledge to end private immigration jails because she knows firsthand what they're like.

"I've been humiliated when I went to those detention centers as being Indigenous, as being trans. It's not easy to stay in solitary confinement for 13 months," Sanchez recalls.

She says she was kept in solitary confinement as a protection against harassment from other inmates. But she says the isolation left her scarred.

"The conditions were inhumane. The conditions were very painful," said Sanchez who's now the founder and executive director of Community Estrella, a non-profit that advocates for the rights of transgender and gender non-conforming people.

Before the pandemic, the Trump administration was expanding the detention system at a record pace by detaining more immigrants without criminal convictions.

But then COVID-19 forced ICE to dramatically step back.

Advocates say this presents the perfect opportunity for President Biden.

"It simply makes no sense that we detain people who pose no threat to public safety simply based on their immigration status," said John Sandweg, a former ICE director in the Obama administration.

But immigration hardliners counter that detention facilities, private or not, ensure immigrants show up to their court hearings and protect the public amid a historic migration surge at the border.

"They are detaining the worst of their population. And these are not people that you would want released back onto the street," said Lora Ries, a former Homeland Security official in the Trump administration.

As for Sanchez, she was released from ICE detention in 2013 after facing a serious attack from another inmate.

For the next five years, her movements were monitored by an electronic ankle bracelet.

She eventually won her asylum case in 2018 after documenting the sexual persecution she faced as a transgender woman in Mexico.