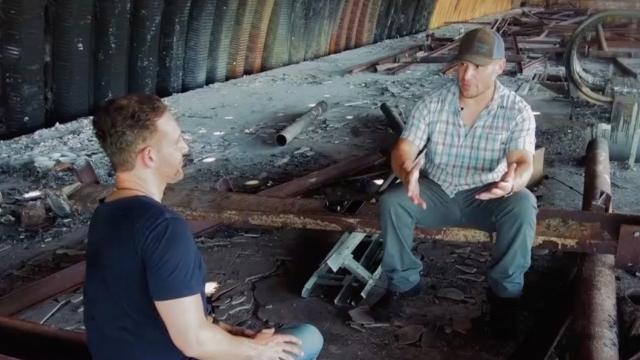 In a field in Eastern Ukraine, American Green Beret Veteran Ryan Hendrickson is doing the dirty, dangerous work of clearing up the deadly explosives that Russian troops left behind.

NEWSY'S JASON BELLINI: For those of us who've never done it and likely never will, what's it like to approach a mine and defuse it?

RYAN HENDRICKSON: It's a healthy intimidation, which is good because I want to have that healthy fear of the explosives.

He developed that healthy fear as a special forces engineer defusing mines and IEDs. He earned a silver star during his eight tours of duty in Afghanistan.

HENDRICKSON: I was finding IEDs that were placed by some brilliant bomb technicians with the Taliban. And so technically, I learned from the best.

One of those IEDs nearly took his life.

BELLINI: You stepped on an IED in Afghanistan. How bad were your injuries?

HENDRICKSON: My boot was at a 90 degree angle to my leg, so it looked like an L. I went into the Limb Salvage Program at Brooks Army Medical Center and technically had my leg reattached.

Twelve years later, he's trying to keep farmers in Ukraine from losing their own limbs, lives and livelihoods. And in documenting his deeds, he's becoming a social media sensation.

HENDRICKSON: People ask me why I do what I do. This is his farm over here. The Russians — they don't hold a candle to the Taliban, not when it comes to explosives.

BELLINI: But they put a lot of them out there.

HENDRICKSON: Yep. It's a game of numbers.

HENDRICKSON: Most of the mines that are in the area are defensive countermeasures to a potential Ukrainian assault. The Russians get pushed back, civilians start to come back to their homes and they want to rebuild. Winters here are brutal. So they're trying to rebuild as quick as they can so they so they can last the winter. The civilian casualty rate for mine inflicted injuries is skyrocketing right now because they're in a rush to harvest because September is sunflower harvest month. They're trying to get back out to their fields.

His is not a high-tech, heavy-protection de-mining operation. He relies on his trusty knife for probing and a detector to avoid a fatal wrong step.

HENDRICKSON: Battlefield triage right here. In case you step on a land mine. You have three different tourniquets.

BELLINI: Forgive me for asking this, but are you doing it for the thrill of it?

HENDRICKSON: I do like the adrenaline rush, but every mine I pull out of the ground is a limb or a life that I saved. I believe your life is kind of like a story.

HENDRICKSON: And the beginning chapter and the end chapter have already been written. When you're born and when you die, in my belief, you don't have any control over that.

HENDRICKSON: What happens in the middle? That's up to you. And my dad told me one time, he said "those middle pages of your book, are they going to be worth reading in the end?"

BELLINI: You'd rather have a be a long story, a novel, than a short story.

HENDRICKSON: Yeah, but it's not up to me. I'm a firm believer. You don't control when you die.

BELLINI: You control whether you're in Ukraine walking around minefields.

HENDRICKSON: Yeah. I honestly believe that if it's if it's your time to go, it doesn't matter if you're in Ukraine walking around minefields or you're sleeping in your bed back in Florida, it's your time to go. So why not help people while you're here?