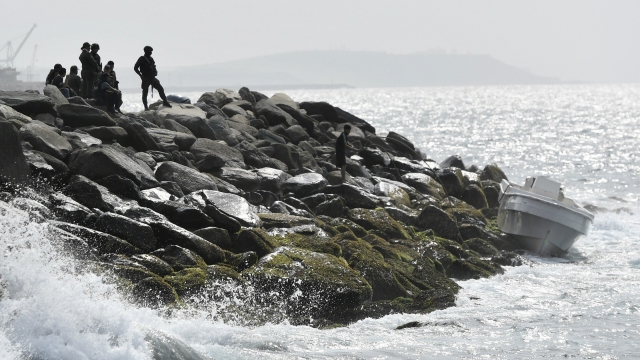 Two former U.S. special forces soldiers are in custody in Venezuela and eight associates are dead after attempting an apparent attack on a Venezuela port city.

Venezuelan President Nicolás Maduro said the U.S. citizens were detained after a group of armed mercenaries "playing Rambo" landed in speed boats in the port city of Guaria before dawn Sunday.

The government released this video Monday as Maduro said authorities arrested 13 men, including the Americans.

In another twist, a Florida resident and former Green Beret named Jordan Goudreau appeared in a Twitter video with a retired Venezuelan military captain. Goudreau claimed credit for launching the raid to topple Maduro.

"At 1700 hours, a daring amphibious raid was launched from the border of Colombia deep into the heart of Caracas. Our men are continuing to fight right now. Our units have been activated in the south, west and east of Venezuela," Goudreau said in the video.

The New York Times reported there was no evidence of additional fighting in Caracas or elsewhere in the country.

Meanwhile, Maduro held up U.S. passports of the two detained Americans, Airan Berry and Luke Denman. He said both were employees of a Florida security firm run by Goudreau.

He called the group "terrorists" and claimed Venezuela has additional proof that the U.S. and Colombia supported an attack to overthrow his socialist government.

"(This is) new documentation, new proof of the participation of the Colombian government and of Donald Trump and their plans to invade and bring terrorism to Venezuela," Maduro said.

The U.S. Justice Department has indicted Maduro on drug trafficking charges and offered a $15 million reward for information leading to his arrest or conviction.

President Trump said Tuesday he had just heard about the events in Venezuela. He added: "It has nothing to do with our government."