What Does It Take To Rectify The History Of Chinese Railroad Workers? 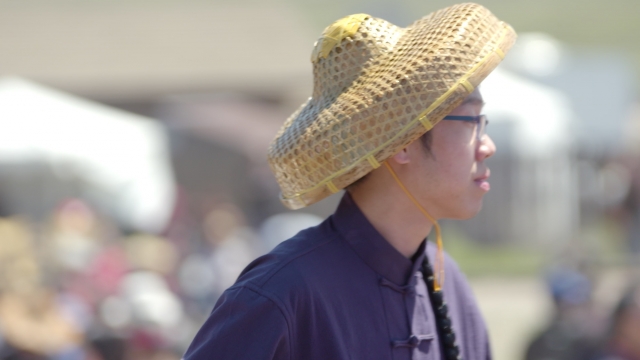 SMS
What Does It Take To Rectify The History Of Chinese Railroad Workers?
By Cat Sandoval
By Cat Sandoval
May 24, 2019
Stanford University is working to right the story of Chinese railroad workers 150 years after the completion of the First Transcontinental Railroad.
SHOW TRANSCRIPT

How does one rectify wrongs of the past, especially when it comes to erasure in history? This year marks the 150th anniversary of the completion of the First Transcontinental Railroad and an opportunity to get the history of up to 12,000 Chinese railroad workers right this time.

Gordon Chang, historian and Stanford University Professor: "Many of the American public are completely ignorant about Chinese railroad workers. Chinese Americans, by and large, don't know very much about them. So there's much to be done in bringing this information, this knowledge, to the general public."

Many of the unsung pioneers who helped build the First Transcontinental Railroad were Chinese. At the 100th anniversary in 1969, the transportation secretary failed to mention Chinese workers. And in this iconic photograph — the meeting of both railroads — that became a defining symbol of this industrial feat, it's hard to make out a Chinese face. In the past, even history books failed to mention them. Without Chinese labor, the East Coast and West Coast may never have been connected. And one could argue America may not have been the industrialized global power it is today. 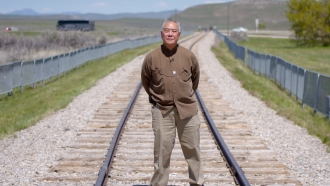 Chang: "School textbooks ... do they do enough in telling the story of Chinese railroad workers? Certainly not. Many of them mentioned the Chinese workers not at all."

Gordon Chang spent decades researching Chinese railroad workers' history and he co-directed this project at Stanford University. This, along with Stanford's program SPICE, aims to teach this forgotten history as a supplementary curriculum in high schools around the country. This summer, program organizers plan to roll out teachers workshops in Boston, Palo Alto and other cities.

Greg Francis, curriculum consultant for SPICE: "The ultimate goal of SPICE for doing this is just to really bring the story of Chinese American railroad workers to as many teachers and classrooms as possible. We know in most curriculum, now, there is some sort of mention of the railroad workers and we'd love for this to be a supplement and to go deeper."

This high school history teacher says he does discuss Chinese railroad workers in class, but says classrooms could go more in depth. Andrew Rybarczyk says: "Overall, I think we can always do better to include more minority groups, more cultural groups, more diversity within the American history classroom. But I do think that many teachers across America are mindful of it and have tried to add it into their curriculum."

Chinese railroad workers are mentioned in this U.S. history textbook. But their involvement is trimmed down to two sentences. Advocates like Chang and Francis think this history should be more than a few lines.

Francis: "A mere 15 years after the railroad was completed, you had the Chinese Exclusion Act, which basically prevented Chinese from coming to the U.S. for almost 60 years."

And while this history book does address the Chinese Exclusion Act in the later pages it doesn't go into depth about the Chinese railroad workers’ experience, nor does it talk about the 3,000 Chinese workers who went on strike.

Chang: "So it was a coordinated, systematic, organized strike. It was the largest strike in American history to that date."

But one of the difficulties in telling this history is the lack of firsthand accounts. Researchers have yet to find letters or journals written by Chinese workers. According to Francis and Chang, letters were being sent to China, but we don't know of any that were preserved.

Francis: "A lot of history there were lost during the Cultural Revolution when a lot of archives or antiquities were burned. And also, there was a lot of poverty then. So there were periods where people would just burn paper for fuel. Despite the lack of written accounts, there’s still evidence of what life was like for these workers."

Francis: "They found along where the railroad was built, Chinese pottery, Chinese tea and so we know what they were eating and drinking. They're also records of payments." 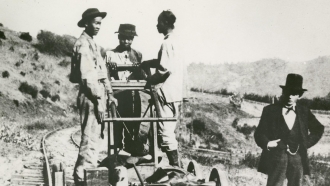 So what can we learn from the near erasure of Chinese railroad worker's history? How can we ensure that future stories are remembered?

Francis: "This is a typical problem of history is the people who are most powerful are writing it. And then it's hard to piece together the experience of other people and their contributions unless they're written down... It is also something we encourage. Teachers can do. Students could do. Citizens could do… Write down and document history."

Stanford's SPICE curriculum and the Chinese Railroad Workers Project are free and available to download online. And the fact that this program is happening at Stanford University has some added significance: The university's co-founder, Leland Stanford, made a considerable amount of his fortune from the railroad and the sacrifices of the Chinese railroad workers.

Francis says this project is not about repentance.

Francis: "Our mission is not to make amends for the wrongs of the past. However, we do want to make sure that the railroad workers have a voice in these conversations, and that their voice is told and their story is told prominently."