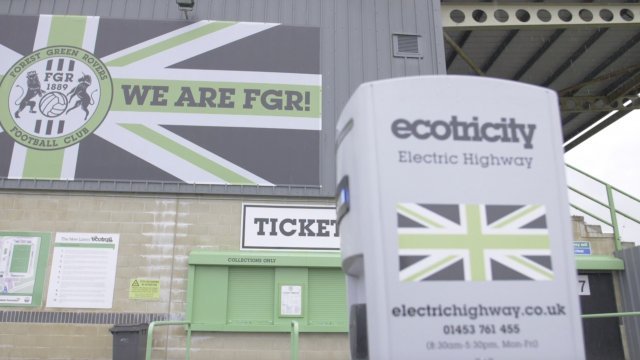 But upon closer look, the club truly lives up to the color in its name.

"We're more about the doing than the than the talking or the pledging," said Chairman Dale Vince.

Vince bought the club more than a decade ago and didn't initially have sustainability in mind.

"I just quickly bumped into the fact that the club and the sport more generally was doing a lot of things that I just didn't agree with and didn't sit with me. So we started making changes at the club," Vince explained.

That meant installing charging stations for electric vehicles around the club. And literally having sustainability in the team's fabric.

"This year we're launching a shirt made out of coffee grounds and recycled plastic. So 50/50 mix again."

There are solar panels on the roof of the stadium and the field itself.

"We capture the water from underneath the pitch and use it again, that's a big sustainability issue."

And grass maintained thanks to "mow-bot," a solar powered robotic mower that cuts the entire pitch on its own, without human intervention. And then there's the food.

"With the menus completely plant based, we won't use any animal products," said Jade Crawford, head chef of Forest Green Rovers.

Players, staff and fans can still eat burgers and pies, except it's all veggie-based. And it wouldn't be proper match day without a pint. Vegan, of course.

"If they come to the ground and they try a veggie burger or a sausage roll, you know like fajitas something, then they might go home. That was really good. I'm going to go to a supermarket and buy some vegan. It kind of just opens people's minds as well."

FIFA named it the "greenest soccer club in the world" and the U.N. says it's the first carbon neutral team. Off-field titles are nice, but Forest Green is in the thick of it in League Two, one of England's professional leagues.

"When it comes to football, we have to be a great football club to carry the credibility of the environment message," said Vince.

Why go through all this trouble? Climate change is affecting sports, from playing baseball games during wildfires to flooding at stadiums. Yet, most leagues worldwide contribute to the problem. For instance, U.S. sporting events generated 39 million pounds of trash in 2018.

"What we're trying to do is to show people that there's another way to live and we don't preach or dictate or anything like that. We just do it ourselves. We put it out there. We hope the people see that. And, you know, think about that maybe in the back of the minds," Vince said.

Green initiatives planted in their heads, keeping the club at the forefront of sustainability.