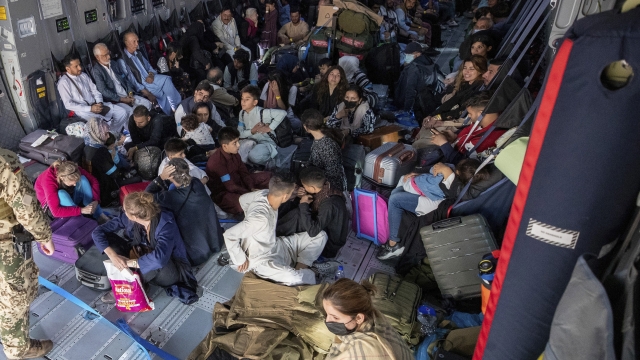 SMS
Foreign Governments Evacuating Afghanistan
By Newsy Staff
By Newsy Staff
August 18, 2021
Secretary of Defense Lloyd Austin tried to reassure the public that the U.S. is working to evacuate as many people as possible.
SHOW TRANSCRIPT

Officials at the Pentagon and State Department say they are ramping up evacuations out of the airport in Kabul.

The Pentagon said 5,000 people have been evacuated so far and the priority remains getting U.S. citizens out, along with Afghans who helped the U.S. military.

But officials did not elaborate on how people could get to the airport with reports of some having a difficult time getting through roads controlled by the Taliban.

Secretary of Defense Lloyd Austin tried to reassure the public that the U.S. is working to evacuate as many people as possible.

"All of this is very personal for me. This is a war I fought in and led. I know the country, I know the people and I know those who fought alongside me. As I've said, we have a moral obligation to help those who helped us and I feel the urgency deeply," he said.

Other countries are also evacuating their citizens, as well as Afghans who want to leave.

The Italian government said one military flight was carrying 85 Afghans out of the country.

The U.N. said it is temporarily moving a third of its Afghanistan-based staff to Kazakhstan because of the volatility in the country.