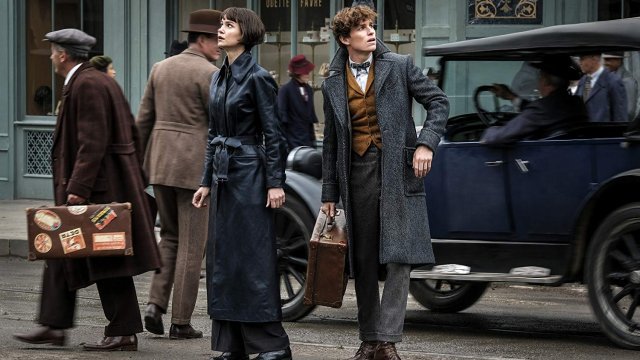 By Jamal Andress
November 18, 2018
This awesome debut comes in spite of the 40% rotten tomatoes score — the worst of the Harry Potter series.
SHOW TRANSCRIPT

Taking the No. 1 spot this week is "Fantastic Beasts: The Crimes of Grindelwald" — the second installment in a five-part Harry Potter spin-off series. "Fantastic Beasts 2" brought in an estimated $62 million in its first week out.

While that's an acceptable opening for most films, it does fall significantly behind the original. "Fantastic Beasts and Where to Find Them" premiered with $74 million domestic dollars. Even if you include all eight Harry Potter movies, this is still the worst opening the wizarding world has had for a feature film.

But fear not my fellow muggles, young hot Dumbledore isn't going anywhere and neither is this franchise.

While American moviegoers are seemingly growing tired of Hogwarts-inspired tales, the foreign box office is running to the theater in droves. "Fantastic Beasts 2" brought in more than $190 million over the weekend. That's actually a better overseas debut than the original.

And while Fantastic Beasts was a fairly expensive film to make, the production budget came to nearly $200 million, Warner Bros. has already made it's money back. The worldwide box office take after this weekend is just over a quarter-billion dollars ($253M).

And that amazing box office run is despite the film apparently not being all that good.

"Fantastic Beasts: The Crimes of Grindelwald" has a series low of 40% on the tomatometer and this is the first time a film from the wizarding world has been certified rotten by the movie review aggregator.

Falling to No. 2 this week is "The Grinch" bringing in an estimated $38 million in its second weekend. That pushes the worldwide total past $150 million.

Even after being in theaters for nearly a month the Freddie Mercury biopic continues to overperform overseas. "Bohemian Rhapsody" made $45.5 million at the foreign box office this weekend and has $384 million in worldwide ticket sales as of this weekend.

As for next week, Let's get ready to rumble!