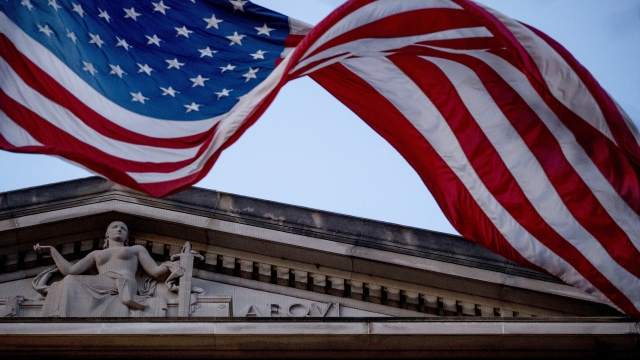 SMS
Foreign Adversaries Are Funding Domestic Extremism In The U.S.
By Sasha Ingber
By Sasha Ingber
January 19, 2021
A blockchain analysis firm has traced a huge payment to American far-right extremists back to a French computer progammer.
SHOW TRANSCRIPT

A major challenge now facing President-elect Joe Biden: domestic extremists — and who is funding them.

"Recently we discovered a very large $500,000 deposit to various organizations that have been involved in domestic extremism, including a $250,000 donation to Nick Fuentes, who was one of the organizers of a rally that took place ahead of the attack on the Capitol," says Jonathan Levin, co-founder and chief Strategy Officer of blockchain analysis company Chainalysis.

Levin says the bitcoin donation was the largest to an extremist cause the firm has ever seen — and was made in December, a month before the Capitol riot. The transaction was traced back to an unidentified computer programmer in France who later killed himself.

"It goes back to his early use of cryptocurrency and the nature of the blockchain, and the transparency enables us to be able to tie all of those different payments together," says Levin.

"That person in the extremist element may not even know who that money's coming from, a foreign adversary. They may be bringing it in through other means and getting it to those people through what they believe is domestic support," says O’Connor.

In other cases, radicals deliberately seek foreign support. The FBI alleges this week that a Pennsylvania woman took a hard drive from House Speaker Nancy Pelosi’s office during the Capitol insurrection and may have been planning to sell it to Russia’s foreign intelligence service.

Riley June Williams appeared to flee but has since been arrested. Experts say efforts by extremists to get help from Russia stems back years.

"Groups like the alt-right were literally on tape chanting that Russia is their ally. So it is it is not rocket science to say that these groups have tried to get support or have been given support," says O’Connor.

Newsy reported the day after the Capitol breach that foreign intelligence agencies in Russia, China and Iran would likely use the insurrection to recruit new assets.

"It is not easy to follow the money," O’Connor says. "But rest assured that the FBI and and the Department of Treasury has people who are very well versed in bitcoin transactions."

Another problem the Biden administration must contend with: the murkiness of terrorism on domestic soil. Membership in a far-left or far-right group is protected by the First Amendment, and FBI agents can't open investigations into foreign funds until there’s information of potential criminal violations.