U.S. Inmates At Front — Or Back — Of Vaccine Line 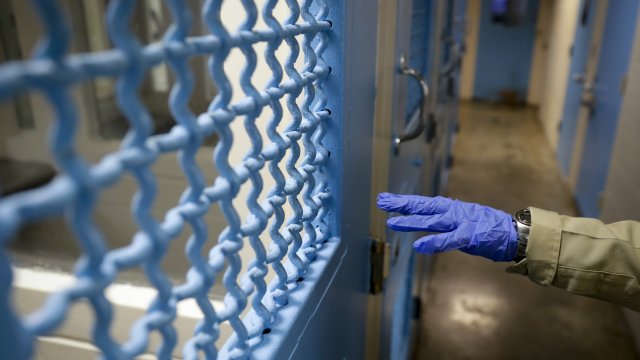 SMS
U.S. Inmates At Front — Or Back — Of Vaccine Line
By Jamal Andress
By Jamal Andress
December 15, 2020
Despite medical community guidance that prisons should be in Phase 1 of vaccinations, many states are pushing inmates to the back of the line.
SHOW TRANSCRIPT

While health care workers and nursing home residents are universally first in line for COVID vaccinations, plans for inmates in America's prisons and jails vary from one extreme to the other.

"There's no way that prisoners are going to get it before members of the vulnerable population," Colorado Gov. Jared Polis said during a press conference.

"I think congregate care settings where individuals are closely together, we know are a documented risk factor, not just for a single individual, but for large populations being exposed to COVID and becoming ill at the same time. From an equity perspective where people are together and at risk in the same situation, we felt it was really important to prioritize that group," Dr. Paul Biddinger, vice chairman for emergency preparedness in the Department of Emergency Medicine at Mass General, said while explaining Massachusetts vaccine distribution plan.

There are six states putting inmates in the first phase of vaccine distribution — pointing to jails and prisons being COVID hotspots throughout the pandemic.

So far, at least 1,600 prisoners and 108 prison employees in state and federal prisons have died from COVID complications. And just this week, new infections increased by 10% reaching the highest level yet of positive cases for those behind bars.

"It's a basic tenet of public health to try and stop outbreaks at their source. And in many of these rural communities, the source is the prison," Johns Hopkins University's' Dr. Eric Toner from the Center for Health Security said.

Toner is a senior scientist at Johns Hopkins — he co-authored a vaccine distribution recommendation report to help states craft their own vaccination plans.

"And so we absolutely need to vaccinate the people in the prison, whether they're staff or inmates, in order to protect everybody," Toner said.

Toner's report as well as reports from the National Academy of Medicine and the Council on Criminal Justice have all recommended that prison staff and inmates be included in the first phase of the vaccination process.

"We also have, you know, both a legal and moral obligation to provide health care to people that are incarcerated," Toner said.

Despite medical recommendations, the Prison Policy Initiative counts seven states that explicitly have corrections workers in their Phase 1 distribution plan but exclude the inmates until later phases.

In Chicago, two separate agencies are handling vaccine distribution at the local jail. The Cook County Health and Hospitals System will be vaccinating inmates and the sheriff's office will handle staff. While the staff are scheduled to be vaccinated during Phase 1, there's no definitive timetable for when inmates will receive a vaccination.

Cook County Jail, one of the largest single-site jails in the country, currently has 400 active COVID cases.

In an email to Newsy, Cook County Health said, "We look forward to receiving sufficient supply to vaccinate our various populations from our employees to our patients [including detainees] to the larger community" but hasn't responded to an email asking for further clarification.

Toner said, "In our view, prison staff and the prisoners themselves should be treated the same. They are exposed to the same risks. Prisons and jails are locations where there have been large outbreaks, and those outbreaks in the jail tend to seed the community."