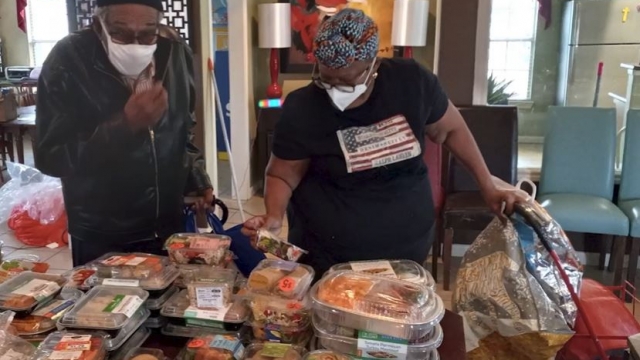 SMS
Food Banks Seeing Impact Of Inflation As Food Prices Rise
By Maura Sirianni
By Maura Sirianni
April 3, 2022
Economists say food prices depend largely on the price of fuel and getting those goods from one place to the next.

Founder Barbara Bronstein says steep inflation is putting pressure on the already-strained budgets of seniors and the disabled living on fixed incomes.

"Because they're being squeezed, they don't have money to cover an 8.6% increase in grocery prices," says Bronstein.

Staff and volunteers delivering fresh food at a pop-up grocery store in south Houston, Bronstein says is needed now more than ever.

"They also don't have access to transportation or in many cases, nearby supermarket; so, we bring the supermarket to them," says Bronstein.

In Milwaukee, people are shopping smarter.

"I go out and wholesale and maybe buy half of a cattle or a whole beef and have them process that so I can have food for an entire year," said one local shopper.

In Colorado Springs, restaurant owners of Urban Tandoor have added a 5% inflation fee, found at the bottom of every receipt.

"Our food cost from before COVID to now has doubled," said Prit Kaur of Urban Tandoor.

Experts say high costs are part of a domino effect in the supply chain.

"When fuel went up from $2 to $4, that adds a cost at every step of the way—all the way from the field to the plate," said Shelley Mayer, executive director of Professional Dairy Producers.

According to a USDA report, all food prices are expected to go up between 4.5% and 5.5% percent this year. Poultry is trending even higher, expected to increase between 6% and 7%.

Dairy, between 4% and 5%. Closed in by the highest increase in goods in 40 years — it's a spike that's hurting organizations like Second Servings too.

You're probably wondering, when will prices fall?

Economists say that depends largely on the price of fuel, and getting those goods from one place to the next.

It also greatly depends on volatility in the world.