Survivors Of The Florida School Shooting Plan A March On Washington

SMS
Survivors Of The Florida School Shooting Plan A March On Washington
By James Packard
By James Packard
February 18, 2018
The students who survived Wednesday's shooting at a Florida high school are planning a march on Washington to call for gun control.
SHOW TRANSCRIPT

The survivors of Wednesday's shooting at Marjory Stoneman Douglas High School in Parkland, Florida, say they're going to march on Washington next month.

A Twitter page and website were set up Sunday for March for Our Lives, which organizers say will call for Congress to pass gun control legislation. A lot of details about the march weren't immediately available. 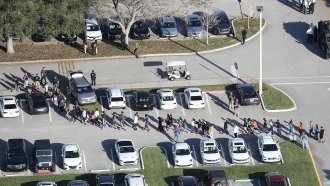 Florida Shooting Suspect Raised Officials' Concern As Far Back As 2016

The students from Stoneman Douglas have been vocal ever since the shooting that they want change. Many of them have advocated for stricter gun control and condemned the political influence of the National Rifle Association. And at least once, a survivor has outright derided the president.

"If the president wants to come up to me and tell me in my face that it was a terrible tragedy and how it should've never happened and maintain telling us how nothing is going to be done about it, I'm gonna happily ask him how much money he received from the National Rifle Association," student Emma Gonzalez said at a rally Saturday.