Florida Ex-Felons Fight Bill That Restrict Their Right To Vote 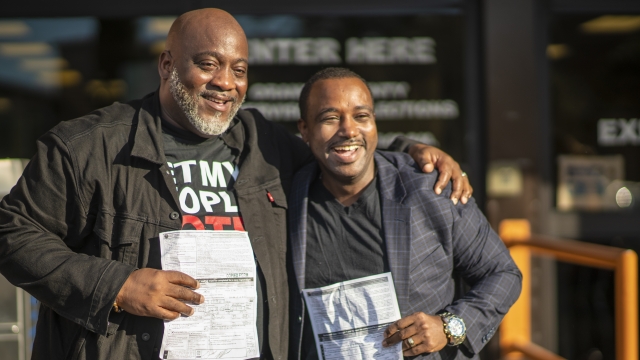 SMS
Florida Ex-Felons Fight Bill That Restrict Their Right To Vote
By Jamal Andress
By Jamal Andress
April 24, 2019
1.4 million ex-felons in Florida were granted voting rights in the 2018 midterms — now they may be forced to pay all their fines before the register.
SHOW TRANSCRIPT

1.4 million former felons in Florida were granted voting rights with the passage of Amendment 4 in last year’s midterms —  marking the largest expansion of voting rights since the Voting Rights Act more than 50 years ago.

But while its passage was celebrated, its implementation has been contentious. Among other things, Florida lawmakers are considering a bill that would require ex-felons to pay back all court costs, fines and fees including restitution before they can register to vote.

Desmond Meade is the executive director of the Florida Rights Restoration Coalition, which led the fight to get Amendment 4 passed. For his efforts, Meade was nominated as a 2019 TIME 100 honoree.

Meade himself was convicted of felony drug and gun possession charges and ended up homeless for years after his release. Flashforward to January, he was one of the first in line to register to vote when Amendment 4 went into effect.

"We just want to feel like we're a part of something, you know? And so just to be able to have the right to vote and say that 'hey I'm a part of society again' is very emotional … It was like, the world said, welcome home."

But now, Meade says his organization is working to keep the soul of Amendment 4 intact.

At issue is what it means to "complete your prison sentence." Meade and the amendment’s supporters call it “self-executing,” meaning it doesn't require any clarification from Florida’s government.

"We didn't reach out to any politician to endorse our campaign. None of that. We did it in spite of the politics because we lead with people first … We believe that there's no need for legislation. If there is legislation going through then we need to be weighing in to make sure that their legislation mirrors what we believe and what we know to be the will of the people."

But fines and fees in Florida courts can be excessive— according to the Florida Clerks and Comptrollers Association, more than $1 billion in felony fines were issued between 2013 and 2018.

"If you're talking about withholding the right to vote, though, because you need to pay a fee, then does that mean that we shouldn't pay taxes until we pay that fee? … Does that mean that we can't get a job until we pay that fee? We want to do things that enhance the likelihood of people plugging into their community, and we know that if a person is able to do that, then they're less likely to commit a crime."

Meade and the Florida Rights Restoration Coalition are sounding the alarm on this proposal and asking Floridians to call their local representatives to vote it down. But with a Republican governor, House and Senate in power, this bill could easily become law, despite Democrats’ opposition.