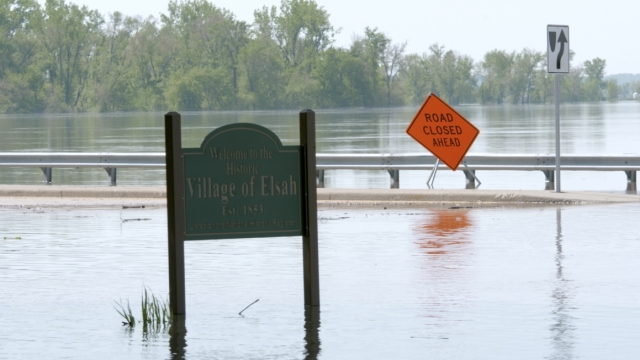 The so-called Great Flood of '93 left marks on Elsah, Illinois, that you can still see today. Now, residents are facing rising waters once again.

That's the sound of water being pumped out of the basement of a home in Elsah, Illinois — a small town near Grafton.

Water from the Mississippi River is invading riverfront towns like this one. A road we drove on yesterday in the town is inaccessible now.

Elsah resident Gary Davis says the basement of his home and bed and breakfast had 2 inches of water in it before he set up his sump pump.

"See, we just had a flood two weeks ago, and it didn't even have a chance to go down, and then this came up right behind it," said Davis.

Davis has owned the Green Tree Inn for several years. He wasn't there for the historic flood of 1993, but you can see the lasting mark those high waters made on what is now his property.

"In '93, when we had the big flood, in our dining room at our inn down there, we had 6 inches of water on the floor. It was a bad flood," said Davis.

The so-called Great Flood of 1993 killed 50 people. It spanned nine states, and the high waters didn't recede for five months. At the time, over 1,000 levees along the Mississippi and Missouri rivers failed. Elsah was one of the hundreds of riverfront towns affected.

Davis says he's used to the flooding. "We average about two a year."

That's why he says he isn't too worried about this round.

"This one here is kind of a nuisance, but it's not the end of the world," he said.