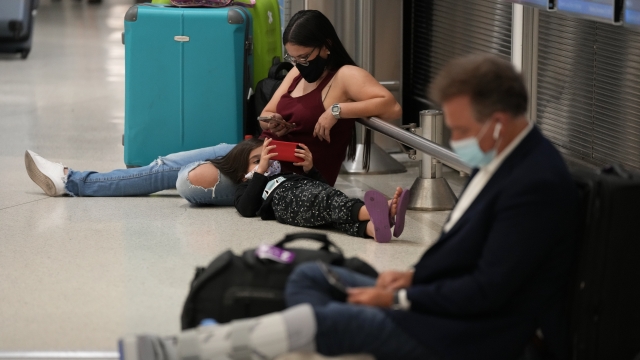 SMS
Flight Delays And Cancellations Continue At Major Airports
By Haley Bull
By Haley Bull
January 4, 2022
Busy holiday travel, the Omicron variant impacting staffing and winter weather are all to blame for the disruptions, said one airport spokesperson.

As winter weather blanketed parts of the East Coast, it left thousands of flight cancellations and delays in its wake, a common story for travelers this holiday season.

She and Steve Ellers said their flight was delayed as they traveled back to Long Island from Tampa. They made the best of it.

"Gives me some time to shop, eat, check out the airport," said Lisa Ellers.

According to FlightAware, more than 3,000 flights within, into or out of the U.S. were canceled Monday, and more than 7,500 were delayed.

Impacts were seen in places like New York and Washington, D.C. Reagan National Airport saw around 88% of flights canceled as it experienced a ground stop while crews worked to clear the tarmac in Baltimore.

"There's a trifecta going on right now. It's holiday travel so there's a lot of people traveling, we've got the Omicron variant, which is impacting staffing and other things causing some issues, then we've got weather issues as well which is very common this time of year. It's all compounding and creating a lot of cancellations and delays," said Emily Nipps, a spokesperson for Tampa International Airport.

Tampa International Airport saw dozens of delays and cancellations, as disruptions were felt in airports across the country.

John Hansman, Ph.D., MIT professor and director of the MIT International Center for Air Transportation, explained a cancellation or delay that impacts the crew causes a ripple effect.

"That problem right now is worse because you don't have as many reserve crew members available because of the COVID situation," said Hansman.

He explained there's a variable for disruption as long as there's an active COVID surge, like any other industry.

"And then you will see over time things will level out. We'll also get more crew members available or new ones will come into training, but that will take a longer period of time — that will be over years," he said.

When it comes to changes the airline industry may take away:

"And you know it takes the system even in normal times three or four days to recover from a major winter disruption. So as we get more and more severe winter storms it's going to be tougher to deal with that so you can add more reserve crew and more reserve airplanes, but that comes at a cost, so there's always a trade-off; how much robustness do you want to design into your system," he said.

Southwest Airlines pointed to winter storms Monday. The airline said in a statement: "A displacement of aircraft and Employees of that magnitude brings other issues, including staffing challenges. The storm has cleared Denver, for example, but the extreme cold requires additional safety protocols for our People working outside there, slowing the operation, causes delays and forcing some cancellations to keep the entire system moving. There is no higher priority than operating safely and ensuring everyone working our flights remains safe."

But other airlines have also pointed to COVID over the holiday season.

American Airlines said the number of COVID-related sick calls was consistent with what they saw the past few days, and the winter storm in Washington, D.C., impacted operations. "The vast majority of impacted flights were precanceled yesterday so we could proactively notify and accommodate our customers and avoid last-minute disruptions at the airport," the airline stated Monday.

"Like many businesses and organizations, we have seen a surge in the number of sick calls from Omicron. We entered the holiday season with the highest staffing levels we've had since the pandemic began and are using all resources available to cover our staffing needs. To give our customers as much notice possible to make alternate plans and re-accommodate them on other flights, we are proactively reducing our schedule through January 13," a spokesperson for JetBlue Airways stated in part.

A statement from United said: "The nationwide spike in Omicron cases has had a direct impact on our flight crews and the people who run our operation. As a result, we've unfortunately had to cancel some flights and have been working to notify impacted customers in advance of them coming to the airport. We're sorry for the disruption and are working hard to rebook as many people as possible and get them on their way."

Meanwhile in Florida, travelers made the best of their situations.

"We had a lovely time, beautiful weather, but we heard about all the cancellations so we thought there was a good possibility, so we're not worried about it. I mean if you're going to be a traveler you can't let things get to you too quickly or too severely or you're just going to be a mess," said Ann Burgess as she waited out her flight delay.