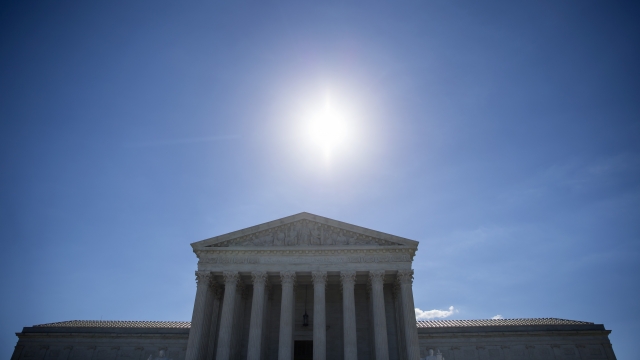 SMS
First SCOTUS Guns Case In A Decade Could Help Expand Gun Rights
By Christian Bryant
By Christian Bryant
November 29, 2019
The case, which stems from a now-repealed gun restriction in New York, is the biggest Second Amendment case to reach the Supreme Court in a decade.
SHOW TRANSCRIPT

The Supreme Court is hearing oral arguments for perhaps the biggest gun rights case in almost a decade. It stems from a New York City restriction on where licensed gun owners could transport their guns. And according to some legal scholars, it's not the issue they would have expected to make it this far.

Ilya Shapiro: "After a decade of not taking any Second Amendment cases, it chose kind of the weirdest, smallest restriction to perhaps start defining the scope of the Second Amendment."

The regulation said gun owners with "premises" licenses could only transport their locked, unloaded guns from their homes to limited locations — and not outside the city. That restriction has since been repealed.

Hannah Shearer wrote a brief on behalf of the Giffords Law Center to Prevent Gun Violence.

Shearer: "The appropriate and conservative course of action here would be to dismiss the case as moot."

Gun safety groups agree with Shearer's assessment — the issue has already been resolved, right? And the Supreme Court could still decide that way.

But the Cato Institute's Shapiro says this could be an opportunity for the Supreme Court to provide direction for lower courts to navigate issues related to guns.

Shapiro: "Since 2008 … [the Supreme Court] hasn't told the lower courts or given any guidance about how to evaluate Second Amendment claims. And so lower courts are all over the place. ... Different courts have adopted different standards, different methods of evaluating these types of claims."

But gun safety groups say that if the challengers get a favorable ruling in the Supreme Court, that could possibly endanger gun laws and proposed legislation.

Shearer: "In a worst case scenario, this Supreme Court could not only strike down New York City's law that's been repealed … but they could announce a new standard for deciding Second Amendment cases. … Judges would have to revisit earlier opinions upholding gun safety laws on many different topics."

In October, the Supreme Court said that parties should come ready to discuss whether the case is moot, as gun safety groups claim. If the justices decide not to make a sweeping Second Amendment ruling on this case, Shapiro says the Supreme Court will have other opportunities to do so in the future.

Shapiro: "There are plenty of Second Amendment cases stacking up behind this one if, at the end of the day, presumably John Roberts, as the middle of the court, decides that it's better to moot this one out."