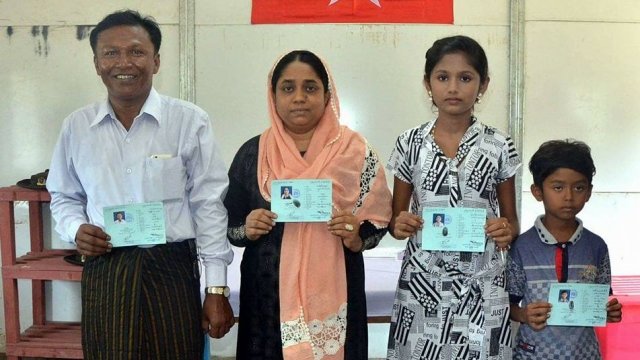 Since August, more than half a million Rohingya have fled their homes in Myanmar following waves of persecution and violence. On Saturday, the first Rohingya family was repatriated to Myanmar.

The Rohingya people are a minority ethnic group in Myanmar. They're not officially considered citizens of any country and are largely shunned by Myanmar's mostly Buddhist population.

An estimated 687,000 Rohingya are currently living in refugee camps in Bangladesh. Bangladesh and Myanmar agreed to a repatriation deal back in November. That deal was supposed to begin in January, but the repatriation Saturday was its first.

Many Rohingya worry national verification cards will brand them with a permanent immigration status, meaning they can't become full citizens of Myanmar.

Activists have been skeptical of the deal since the get-go. Amnesty International released a report in November warning repatriation wasn't the right course of action yet.

And human rights groups seem just as skeptical of the repatriation on Saturday. One group told AFP repatriating this family seemed like a "public relations exercise." And a U.N. report from last week says the country still hasn't addressed the actual cause of the crisis.