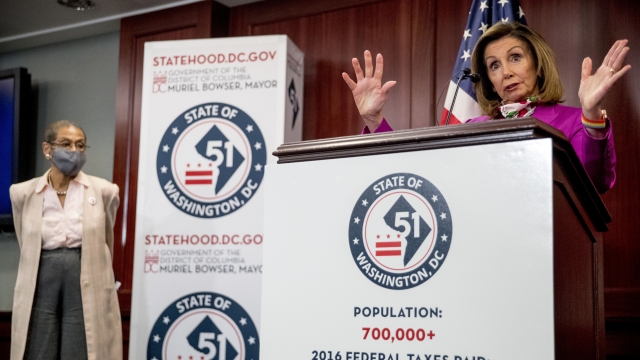 The slogan can be seen on license plates throughout Washington, D.C: “End Taxation Without Representation.”

District of Columbia residents pay federal income taxes, but with only a non-voting delegate to the House of Representatives, they have no real vote in Congress.

Holmes Norton first brought a bill to make D.C. Its own state up for a vote in 1993. It failed, and she has introduced it again every year since.

This Friday, the bill will come up for a full House floor vote for the first time in nearly 20 years.

“I have virtually all the Democrats as cosponsors,” Holmes Norton told Newsy.

Republicans have long opposed D.C. statehood. For one, voters in the district lean heavily Democratic, with nearly 91% of the district’s votes going to Hillary Clinton in the 2016 general election. Thus, the district's two senators and one representative-at-large are all but certain to be Democrats.

However, some legal experts claim passage of H.R. 51, the D.C. statehood act, would be unconstitutional, and say statehood could only be achieved by a constitutional amendment.

“The framers set it up this way for a particular reason,” said Roger Pilon, a constitutional studies scholar at the CATO Institute, a libertarian-leaning think tank. “They didn't want any single state to be overly influential on the federal government for practical reasons.”

Democrats in Washington have long called for the District to become the 51st state, allowing the district's leadership more control over the city.

The issue came to a head earlier this month when President Trump deployed federal police in response to protests over the death of George Floyd.

If passed, H.R. 51 would leave all federal buildings and monuments out of the new state and under direct control of the federal government.

”All of the central federal enclave would continue to be part of the federal government,” explained Alan Morrison, a professor at The George Washington University Law School, who has argued nearly two dozen cases before the U.S. Supreme Court. “That would be the seat of government as required by the Constitution.”

The statehood law is widely expected to pass the House with support from Democrats alone and then to die in the Republican-held Senate.

“There’s no other way to make the capital city equal unless you make it a state,” Holmes Norton said.